The water system will comprise of four elements; the fresh tank, used tank, pump and water heater. For Movanos of model year 2010 and before, the tanks fit in front of, and behind the rear axle. However, on new Movano, model year 2011 and on, there has been a redesign and the floor is quite different. The spare wheel is also housed underneath behind the rear axle. So a different solution is required. CAK Tanks spent several hours, with my van on the ramp, deciding how best it could be accomplished. The solution that I have adopted is to install the fresh tank in the space between chassis member and valance on the off-side, running longitudinally (front to rear) and the waste tank running across the van in front of the rear axle. I will describe this in more detail, with photos, when I install them.

Fresh tank. This is a 68 litre tank. It will have an inlet to the filler, which will be on the off-side to keep it separate from the fuel filler. It will have one outlet that will go to the water pump. It will have probes mounted in it to tell me how much water I have left and it will have an anti-frost element that, combined with a thermal wrap, should prevent my fresh tank from freezing in temperatures down to minus 5 degrees centigrade. That should be enough for winters in England, though I do not intend to suffer many of those.

Waste tank. This is a 50 litre tank. It will have two inlets; one from the shower and one from the sink. It will have studs in it to warm me when it is becoming full and an outlet to a tap mounted at the edge of the van so that I can park it over the waste grates to empty it. The inlets are mounted on the sides of the tank so that waste water does not slop back up the pipes during braking.

Water pump. I am using the Shurflo TrailKing 7 litre, 20psi unit. This is a very good quality pump and, at 7 l per minute, more than enough for a decent shower. The 20psi is the right pressure for my chosen water heater.

Water heater. I am using the Malaga Mk III GE. This holds 13.5 l of water. The GE stands for gas and electric. It is a unit that is particularly suited to a panel van conversion. The flue comes straight out through the side wall on the off side so that it does not vent into the outside sitting area.

Big day! Off early to Kenilworth to have my tanks fitted. It has not been without its dramas. I was phoned on Thursday to be told that CAK Tanks could not fit the fresh tank, as originally designed. They had spoken with Vauxhall who had told them that the webs that we planned to cut out, were structural. They were required for side-impact protection. If we were to cut them out, we would void the warranty; void our insurance because the vehicle would have been modified in an unapproved way, and significantly reduce our side-impact protection. I guess a nod is as good as a wink to a blind man, but this was fairly clear. We had to change the plan. I was fortunate to have Steve and Rob helping me and we had soon modified the plan and selected a different fresh tank.

The solution was to use an existing tank, designed originally for a VW installation and to mount it across the vehicle in front of the waste tank. This solution was tested and then the tanks modified with ins and outs in the right place, sensors for telling me how full each is and a frost element to stave off the more extreme effects of English winters should I find myself experiencing them.  Mounting them was relatively straight-forward. Holes were drilled in cross-members to allow hooked threaded bolts to be hung. Brackets were then slung under the tanks and all tightened up securely. In the case of the fresh tanks, strips of ply were used as spacers to stop the sender unit being crushed against the chassis rails. 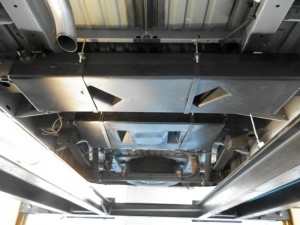 Once the tanks were securely in place, it was time to install the filler for the fresh tanks and the drains for both. The filler has both a main 20mm pipe and a smaller 10mm breather. Both have to come up through the van’s floor, the insulation, the ply floor and then go out through the ply lining the side and the insulation of the van wall. Unfortunately, I had been led to believe that it would be better if the ply floor was out for the fitting. So I removed the walls and the lockers as well as the floor ply before I went down. I needn’t have done so. It is easier if the floor is in place as, when a hole is drilled in the floor, it is done from inside out. So the hole is cut in the ply then the van floor. Sadly for me, that was not the case and I had to try to line up the floor so that I could cut out the holes so that they matched up with the holes that Steve had cut in the van floor. Not the end of the world, but a significant amount of extra work. All of that is now done. 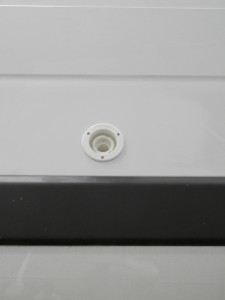 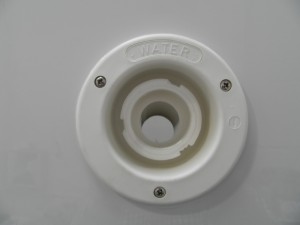 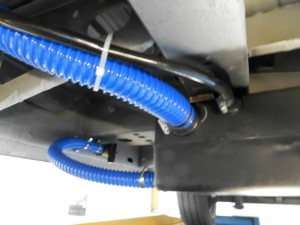 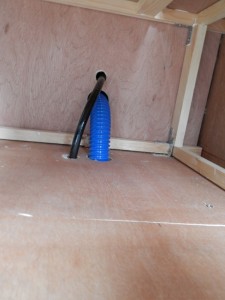 Fresh water filler coming up through platform in sitting area and going out through wall ply lining.

The next stage is the fitting of the Shurflo water pump in the garage area of the van. The inlet is drilled through and the pipe is waiting. It has two outlets; one to the water heater, the other to any cold outlets. I will have two; the shower and the sink in the kitchen area. I will not cut the holes for the water outlets for the shower and the sink until I have those items and can position them accurately. That will be probably be in August.

Over the past few weeks I have installed the Shurflo Trailking water pump as can be seen here. 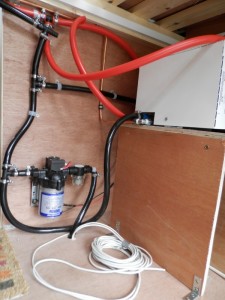 I have chosen to use hose rather than pipe as the runs are short and the flexibility is needed; black pipe for cold and red for hot. Water is drawn from the fresh water tank and pumped to four locations: the hot water heater, the loo flush, the shower and the sink. Hot water is pumped by the same pump’s pressure to the shower and sink tap. The pump is wired up and working.

The hot water boiler is in and connected up and it can be seen here: 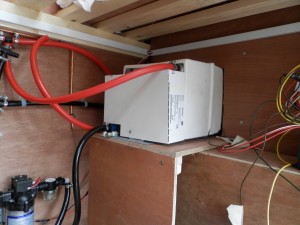 I have chosen the Propex Malaga 4GE. It is a well proven unit that has a 13.5 litre holding tank, which will be heaps for a good shower and washing up. The GE bit of the designation refers to gas and electric. That means that it can use LPG on its own or 240v electric if hooked-up, or both for super-fast heating. The critical thing with this installation is to get the flue and air intake correct. The flue cannot be extended and so the unit has to sit in the correct relation to the van wall. The only hot bit is the flue and that is not in contact with either insulation or the ply lining. 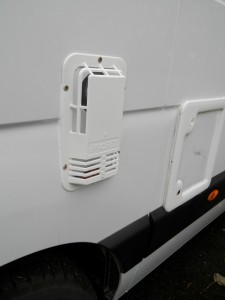 The flue is at the top and the air intake below it. The plastic unit is a sealed unit that, when mounted and sealed, does not let in water. There are special seals around flue and inlet.

I have the very nice tap for the sink and the shower mixer tap but I have not yet settled in my mind where to mount the shower mixer tap. I want to have an overhead shower in a fixed position, rather than a shower head on a chrome hose. I feel that it will be a better solution. I have not yet, therefore, settled on a shower hose although the short-list is down to about three.