At the beginning of February 1918, the Regiment moved from its winter quarters to a location just to the west of Amiens. A month later, as a result of Indian Cavalry Regiments being sent to Palestine, the 17th Lancers joined 7th Cavalry Brigade of the 3rd Cavalry Division, commanded by Brigadier-General BP Portal, DSO, late 17th Lancers. The Brigade consisted of the 7th Dragoon Guards, the 6th (Inniskilling) Dragoons and, until recently, the composite Household Cavalry regiment who had been converted to machine-gunners. Throughout March, there were great expectations of a major offensive, expectations that became reality on 20th March.

Early the next morning the Brigade was ordered south, little anticipating that the next occupants of their camps would be the Germans. There followed a seven-hour night-march arriving about fifteen kilometres south-west of St Quentin in the early hours of the morning. The dismounted regiment, consisting of 200 men from each regiment in the Brigade, was then ordered to hold Frieres wood just west of the Crozat canal, where the Germans had formed a bridgehead. The Germans had used infiltration tactics, advancing where resistance was light and pinning down more robust defenders with light attacks. The result was chaos. By the following morning, Brigades were mixed up, communications between commanders had broken down, companies were disorientated and cohesion between regiments had ceased, as all competed for road-space with French civilians and heavy artillery moving against the flow. Between the 22nd and 28th the Regiment was sent to one place to fill a gap, then to another place to cover a retirement, then to hold a bridge, and even, at one point, to carry out troop drills between our positions and the enemy’s to create an impression of force. 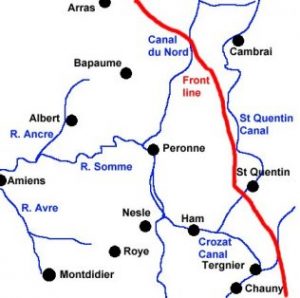 The Long Long Trail. The First Battle of the Somme 1918. Available at: https://bit.ly/2Re9Deg

Early on the 23rd, the Regiment was told that the Germans had broken through at Ham, south-west of St Quentin, and were moving south-west. Another fifty men from each regiment in the Brigade were ordered to join a divisional column to stop the advance. The remaining 75 men of the Regiment were then ordered to cover the bridges at Sempigny and Pontoise. As they approached the area of the bridges, they were informed that the French were destroying those bridges and so waited just south of the River Oise, where they were later joined by the dismounted party that had been holding Frieres wood.

The General commanding 24th Division wrote to the Regiment on 4th April thanking them for their valuable service. He wrote that they, “responded willingly and eagerly to every call made on it at all hours of the day and night.” He commented that the help given “was particularly effective and especially appreciated [as] divisions no longer have mounted troops’ (Micholls, 1931, p.119). Mobility was still valued in fluid situations such as these.

On 29th March, the Brigade concentrated for a move north towards Amiens, forced by the German advance towards Montdidier, 35 kilometres south-east of Amiens. They swung west and then north covering sixty-five miles in two days arriving about 10 kilometres south of Amiens on the 31st. Information about the enemy was so confused that, for the first time in four years, the Brigade moved with an advance and flank guard. But within a few days of arriving, another German attack was mounted astride the Amiens to St Quentin Roman road, just to the east of Villers-Bretonneux and the Regiment was dispatched to re-enforce 6th Brigade. It was ordered to fill the gap that had developed to the south of the road. All day, the positions astride the road were under artillery attack. In the afternoon, the Regiment learned that the Australians to their south were retiring exposing the positions on the ridge line which, were they to fall, would allow the Germans a position commanding Amiens and giving them observation of the line of the Somme into Amiens. 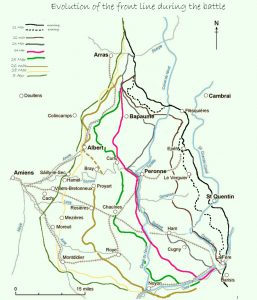 There were no troops available to reinforce the position and the commanding officer decided to gallop D Squadron up to reinforce a position being doggedly held by some Royal Dragoons. The gallop crossed about 600 metres of open ground under artillery and machine-gun fire reaching the position and recovering the led-horses with few casualties. The Australians then rallied on the right, following a misunderstanding, but on the left the Germans were still advancing, crossing the railway line at Villers-Bretonneux. The following morning, the Germans sent over an artillery bombardment, but did not follow it up with an attack on our right.

Over the two days of plugging gaps and reinforcing the defence, two officers and seventeen men were wounded but only two killed: Sergeant Rashbrook and Shoeing-Smith Humphrey, whose body was never recovered and is commemorated at Pozieres Memorial. 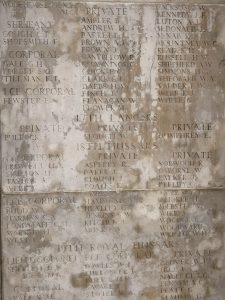 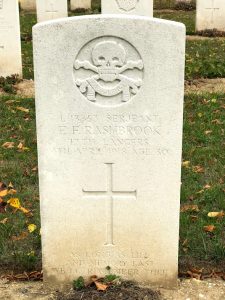 The General Officer Commanding 9th Australian Infantry Brigade, Charles Rosenthal, wrote to the Brigade on 7th April thanking them for their “prompt and most valuable assistance” stating, “As has happened so often during the recent fighting, the cavalry on the morning of the 4th inst. undoubtedly saved the situation.” He ended, “Personally, I am proud to have the opportunity of fighting on the same battle-ground with the British cavalry.” (Micholls, 1931, p.125).

Members of the regiment were awarded seven Military Crosses a Distinguished Conduct Medal, five Military Medals and one bar to a Military Medal for their part in these operations.

Thus, the German attack towards Amiens ended and their centre of operations switched north to the area of Ypres. There, attacking south, they drove the British line back to Mont Kemmel, Bailleul and St. Venant but again the line held and their force was spent without breaking through. The Regiment having been ordered north on 10th April, and then back to Tangry, near St Pol, stopped on 16th April for a refit. In three and a half weeks, they had marched about 230 miles, as well as fighting around Amiens.

In April and May, all the armies fighting in Europe, and civilian populations, were struck by an unknown disease that the Army cautiously called P.U.O. or Pyrexia of unknown origin. Living in the open air, of necessity, casualties were not as severe as in England, but many went down with what came later to be known as ‘Spanish Flu’. The first phase of the illness in the Spring was less severe than when it returned in the Autumn killing millions, world-wide.

By the end of July, the retreat was over. Few sensed that within a week, the German army would start to be rolled back in what we now know as the ‘Hundred Days’, possibly the greatest victory of British arms, as Britain, her allies and Empire struck back.

The Long, Long Trail, The British Army in the Great War of 1914 to 1918, Available at: https://www.longlongtrail.co.uk/battles/