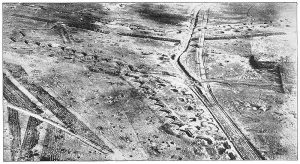 Battle raged around Bullecourt, a strongpoint on the Hindenburg Line, or ‘Siegfried-Stellung’, in April and May 1917. German trenches were deep, thick belts of barbed wire protected them, and concrete fortifications strengthened the defence on ground chosen for its advantage and fields of fire. The British and Australian troops were deployed below them in open ground south and south-west of Bullecourt. 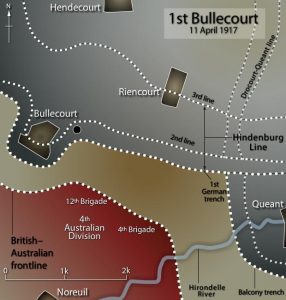 Gough’s Fifth Army was on the right of the line and Bullecourt was on its extreme right flank. The battle was in two parts; the first attack on 10th and 11th April, the second on the 3rd and 4th May 1917. The first was intended as a diversionary attack for the main effort further north but following reports of success at Arras, was brought forward starting the day after the northern attack, so leaving no time for preliminary bombardment. The first April attack can be seen more in the nature of a battalion level fighting patrol where several battalions of the West Yorkshire Regiment advanced towards the Hindenburg Line where they were to meet up with the Australian battalions. 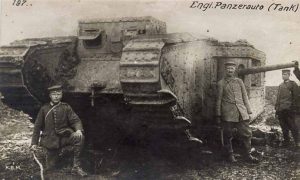 Much had been expected of eleven tanks of the Heavy Branch Machine Gun Corps which it was hoped would be able to breach the wire, clearing a way for the infantry. However, they arrived late, failed to appear on the start-line and contributed little. In heavy snow fall, without the support of their tanks, the Australians decided to abort their attack, but were seen leaving their jump-off points and engaged by artillery. Fortunately, there were few casualties. On the second day, on the right, the Australian 16th and 46th Battalions both breached the Hindenburg Line between Bullecourt and Riencourt to the east, before launching the 48th Battalion through their positions to exploit the breach to reach the German second line. Soon it became apparent that the Australians were running short of bombs and ammunition and were facing determined German counter-attacks. Withdrawal became necessary but it proved impossible to recover many of the wounded who, left behind, became prisoners, 1170 of them. Two thousand more were killed or wounded and recovered, together more than in any other single action of the war.

The West Yorks fared less well having reached the German defences but, unable to break into the them, withdrew suffering heavy losses from machine-gun fire as they left.

The Second Battle of Bullecourt started early on 3rd May. The Australian 6th Brigade found the wire well-cut following the bombardment and managed to break into the German line using a machine-gun barrage, though the 5th Brigade found the going harder and did not reach their objectives. Night fell after a day of attack and counter-attack. Resupply was achieved overnight but it was impossible to evacuate many of the wounded. 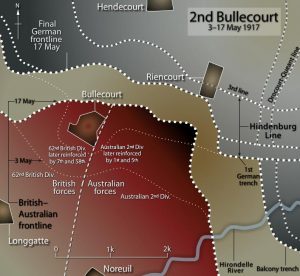 The 62nd (West Riding) Division on the left attacked with all three brigades, supported by tanks. The right-hand brigade fought into Bullecourt but the brigade in the centre (186th) came under heavy and sustained machine gun fire forcing it to retire. Some reached objectives beyond Bullecourt, but attacked on both unsupported flanks, were cut-off and killed or captured. One tank managed to enter the village where it was hit and set on fire. Other tanks had reached the German lines but without supporting infantry, were forced to withdraw. The Division also suffered over 3000 killed, wounded, and missing.

Positions were consolidated over the following few days with a foothold in Bullecourt held by 7th Division, who established contact with the Australian bridgehead. The Australians dug communications trenches forward to their captured stretch of the Hindenburg Line so that troops could be re-supplied and casualties evacuated. Over the following week, the British and Australian troops were subjected to continuous shelling and attack, in some cases by flame-throwers, but held their positions until fighting died down on the 15th May.

The battle confirmed some tactics, gave a glimpse of some new ones, and seriously eroded Australian confidence in British military leadership. Attacking a well defended, fortified line without sufficient artillery preparation almost guaranteed failure and high casualties. The continuing deficiencies in British Intelligence allowed mistaken optimism to guide strategic thinking. On the other hand, tanks achieved some significant small success although, unsupported by infantry, of a fleeting kind. Learning to move close behind advancing tanks would take time and increased confidence in these machines. That would come, in time.

Australians on the Western Front. Available at: http://anzacportal.dva.gov.au/history/conflicts/australians-western-front/australian-remembrance-trail/bullecourt-diggerfrance.  Accessed 22 September 2017.