In 1915, the French Marines were disbanded and formed into a 6000 strong Brigade of Marine Fusiliers (my translation of “fusiliers marins”) consisting of two regiments of three battalions and a machine-gun company. They retained naval rankings.

After three years of fighting together, in September, one of these battalions was deployed astride Route Nationale 2 to attack strong German positions at Moulin de Laffaux. 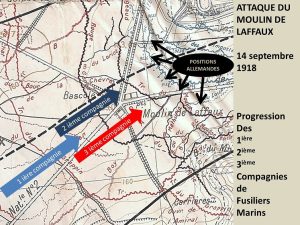 The 3rd Company, commanded by Lieutenant de vaisseau Pierre Marrast, was to attack north-east on the south side of the RN2 towards the carrieres de Fruty; their Battalion HQ was in dead ground to their rear, 100 m south-east of the road. Marrast was recently back from 4 days of leave and in buoyant spirits. His close friend, Enseigne de vaisseau Jean Dubois, had postponed his leave so he did not miss the attack, writing to his mother, “Naturally, I will come only afterwards, for I will not leave my men.” 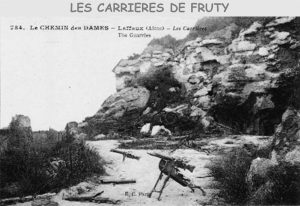 The attack reached the carrieres de Fruty and as Dubois asked his orderly to pass him his rifle, so he could shoot at some enemy, he was killed with a shot through the head. Marrast confirmed to his company that it was the objective and started to dictate his report. As he reached the point where he described the death of Dubois, Marrast was himself hit in the head by a bullet and killed.

It is worth pondering what it was that made these men face the prospect of death with such equanimity. They had grown up in a France humiliated by Prussia and now invaded by Germany. Memories of France’s greatness under Napoleon were part of the public consciousness. Conscription was universal in peacetime and had not long before the war been extended to three years to make up for a slower growing population. Now they were fighting for France’s freedom, glory and sense of self-worth. And their lives were on the line, as had been the lives of numerous of their colleagues who had fought with them and fallen.

It is often observed that things that have no cost have no value. The freedoms that we experience daily came at great cost, but it was a cost not paid by us. As we have inherited freedoms of great value, we have come to take them for granted, as indeed they are. Love of one’s country, home and family are right and noble, and the foundations of society. We should be willing to defend them. Yet the very idea of loving one’s country, having become conflated with the horror of excessive nationalism, has resulted in generations for whom the idea of a country of one’s own is anathema. Every attempt is made to erode national pride and consciousness in the utterly vain expectation that that will remove the danger of war. Threats to our society come from new directions and in new guises that may require as much spirit and valour as of old, though the fields of battle may not be the countryside. I wonder if there are those still willing to fight the good fight or even to recognise the enemy?