The main attack of the Nivelle Offensive was mounted by the Reserve Group of Armies on the Chemin des Dames plateau north of the River Aisne on 16th April 1917. There were reasons to believe that a successful attack here could bring an early defeat of the German army. 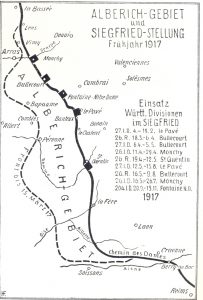 First, after withdrawing to the Siegfried-Stellung, the western front loosely resembled an L shape running slightly east of south from Arras for 150 km before turning due east along the Chemin des Dames plateau. If the line could be breached on the Chemin des Dames, the break-out north would turn the flank of the German army forcing their withdrawal to unprepared positions and re-introduce mobile warfare.

Second, the nature of the plateau prevented the Germans developing their defence in depth, as they had done further north; at one point, the plateau is less than 300m wide. Probably, nowhere on the Western Front presented such a thin defence. On the other hand, the sides of the plateau are steep providing defenders with complete domination of the approaches and observation of the preparations. But as Uffindell asks, “if not [here], where could Nivelle attack?” (p.7). France had to repel the German invasion and had to erase the humiliation of defeat by Prussia and her allies in 1870.

The French 6th Army, commanded by General Charles Mangin, one of three armies in the Reserve Army Group, was given the sector from near Hurtebise Farm, west to Cerny, then south-west to between Vailly and Soissons before turning slightly west of north past Moulin de Laffaux, thus including the whole Vailly salient. 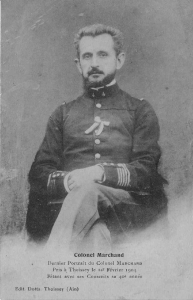 Their easternmost Division was the 10e division d’infanterie coloniale commanded by the complex, impossibly brave but highly strung, 54 year old, Jean-Baptiste Marchand. He identified so closely with his division over the two years he had commanded it that it had become known to all as Division Marchand and, remarkably, he continued to command it until the end of the war.

The intention was for the first wave to move swiftly up and over the ridge taking their first objective as the River Ailette, some 2.5 km north of their start positions. The second wave would then move through the first on to the second objective. Speed was of the essence; the advance was to move 100 m every three minutes close behind a rolling barrage. Strong points were to be bypassed and cleared by reserves.

Over flat ground this type of advance might have been possible but two unique characteristics of this ridge made it impossible. 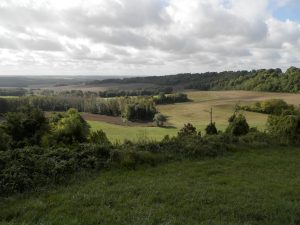 Looking down towards the French front line 16 Apr 1917

First, it is very steep and the German first line was lightly held acting as forward observers. Second, this part is riddled with underground workings from centuries of mining. The French knew these were there but had no way of knowing what the Germans had made of them. The Germans had not been idle extending the network so that troops could move undetected and protected and appear unexpectedly on the southern slopes. The exits on the northern slopes provided points from which any breakthrough could be attacked. 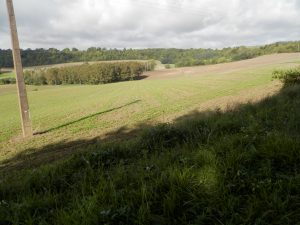 Terrain over which assault was made seen from their right flank.

The preparatory French bombardment had almost destroyed the lightly-held German first line on the forward slope, and the ground over which the assault had to move, but had been much less successful with the main defensive line near the crest of the ridge, making little impact on the third defensive line on the rear edge of the plateau. Worse, German machine gunners appeared from the mine exits on the southern slopes after the barrage had passed to engage the assaulting troops, sometimes from the rear. The combination of un-destroyed defensive lines, including wire entanglements, very steep terrain, and unexpected machine gun fire from mine exits quickly stalled the assault. However, the artillery stuck to its rigid timetable, unaware of changing circumstances, without authority to adapt, rolling on leaving the assaulting troops to the mercy of German artillery and strong defences. Despite tremendous valour, the Division’s assault had stalled within four hours of the start. The next day Nivelle changed the axis, tasking 5e armee to attack north-east to bypass the Chemin des Dames, but with no more success.

French military doctrine, developed after defeat in 1870, placed great emphasis on offensive spirit and personal leadership. Both are essential military qualities, but in modern warfare could not overcome deficiencies in communication and command. The German army in 1916 could not overcome the gritty and heroic defenders of Verdun. The French were no more successful when roles were reversed.