The strategic background to the Battle of Festubert was similar to Aubers Ridge. The French Tenth Army was mounting a major offensive on the ridge near Vimy and Joffre did not want German troops reinforcing that front from quiet sectors further north. Either the British had to attack in force or they should relieve the French corps so that they could take part. The latter would have been humiliating; the British were there to fight, not to make up numbers. Yet their numbers were still small, by comparison, and their logistic supply, particularly of ammunition, fragile. However, there was still a general feeling that it might be possible to break through the enemy line which might restore some mobility to the war.

It was perhaps this optimism that caused the General Staff to doubt the intelligence they were receiving. It was also true that the German concept was to hold defensive positions on higher ground in strength and the Allies understood that they had to be ejected. There was no alternative to attacking. Having understood that they had to attack in force, it is less surprising that factors favouring the plan gained greater prominence.

The factors that should have caused greater concern were those they could not influence. The enemy had reinforced the sector following Neuve Chapelle and Aubers Ridge. They accepted that the British were a force to be taken seriously and built strong defences. Because the land is crossed by substantial drainage ditches and the water table is high, these had to be built up, 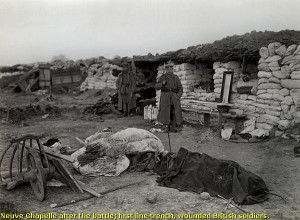 They had done so using sandbags forming major breastworks. Designated North and South, these breastworks dominated the right half of the ground between Festubert and the La Bassée road just south of La Quinque Rue, First Army’s objective. Second, they had greatly improved their communication trenches back to prepared depth positions and they had located their reserves out of range of direct artillery fire.

British artillery was in a poor way although the figures sound impressive. There were 433 guns firing on a 5000 yard front. There were 36 six-inch howitzers firing high explosive at the enemy breastworks to create gaps for the infantry assault. 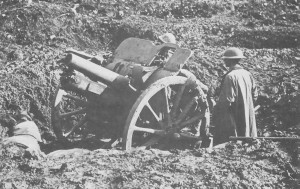 The 54 four and a half inch guns would fire high explosive onto the enemy support lines, as would some of the field guns. 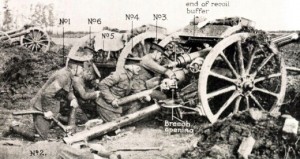 The majority of the 210 eighteen pounder field guns would fire on the wire entanglements. The problem was that there were no high explosive shells and shrapnel was useless in clearing wire. The fire was closely observed and it was obvious that many of the howitzer HE shells were duds. In total, on the first day over 100,000 shells were fired.

Each division was attacking 2 brigades up, each with 2 battalions leading. On the left, 6 Brigade advance and capture the enemy trenches with few casualties. However, of their left 5 Brigade have a more difficult assault against a more alert enemy. Some men reach the enemy lines and the reserve battalion is sent forward to support them. But by now the enemy is responding sending reinforcements up to the strongpoints and bringing artillery fire onto the British trenches. The supporting battalions of 6 Brigade are unable to move forward from their start trenches to the captured German trenches due to machine gun cross-fire from the unsuppressed strongpoints. On 7 Division’s front, six field guns have been brought up to the front line to fire over open sights at the breastworks which in some places are only 80 yards in front. The assaulting troops of 20 Brigade advance too fast and many casualties are caused as they catch up with their own barrage. They are then held up crossing a deep ditch and from cross-fire from the Quadrilateral, which has seen no artillery suppression. On their right, 22 Brigade have crossed to the enemy trenches and are bombing their way along the system towards the northern breastworks. They continue fighting in the trench system and secure La Quinque Rue, in their area. The men in the most advanced positions of the Orchard and northern breastworks are now under intense German artillery fire. 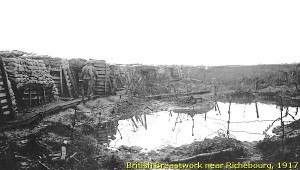 The next day, the 17th, was a day of low cloud and heavy rain. The Germans planned to withdraw 1200m to support positions. They provided additional support troops and artillery fire to allow this, but combined with the British barrage on the Quadrilateral and German front line, those troops were unable to do so. Many were killed in the attempt and 450 men surrendered. German artillery barrage continues all morning. 7 Division pushes 21 Brigade forward into the gap caused by withdrawing German troops and clears the Quadrilateral. As 6 Brigade moves south towards La Quinque Rue, it comes under heavy machine gun fire from their left. They call for artillery which unfortunately also hits British troops in the Quadrilateral.

Position on 17 May showing the new German front line (Brown). Courtesy of www.webmatters.net.

Around noon, Haig responds to reports of success and orders the 3rd Canadian Brigade to support I Corps and extends the Indian front in order to relieve 5 Brigade to continue their advance. He also swings the attack south-west toward the La Bassée canal and railway triangle. The first objectives is to be Violainnes and Chapelle St Roch. But further attempts to attack across La Quinque Rue towards the Orchard and that end of the northern breastworks are halted by artillery and machine gun fire. Movement of men and materiel across the open land behind the new British line is very difficult.

In the evening, 21 Brigade attacks eastwards against the southern breastworks facing Festubert. They are confronted by a deep ditch covered by fire that had not been visible. Some men drown in attempting to cross.

The next day saw no let-up in the rain. In the afternoon the Canadian and 51st Highland Divisions are ordered to relieve 2 and 7 Divisions and to continue the attack. Meanwhile, preparations are made and a new bombardment begins. When the attack is launched, it is immediately neutralised by machine gun and artillery fire. The Germans had completed their withdrawal establishing their new front line but it had not been noticed by the British and had not been affected by their artillery. Then during the evening Canadian and 51st Highland Divisions relieve 2 and 7 Divisions. Between 19th and 24th May the Canadians and Highlanders continue the assault and capture the Orchard, which became known as Canadian Orchard and the southern breastworks.

Joffre had been pressuring the British to relieve another French division south of the La Bassée canal so that it could take part in the continuing assault at Vimy. The 2nd Division was ordered to do so and it completed the relief by 31st May. In the meantime, Sir John French had ordered Haig to stop the attacks at Festubert as artillery ammunition was critically low and the Germans had reinforced their new line in considerable strength.

The pattern had been established that would last until 1918. But there were important lessons from the battle and there were far-reaching effects. On 15th May, there was an article in the Times reporting the shortage of shells and their poor quality. This directly led to the collapse of Asquith’s Liberal government and the appointment of Lloyd George as the first Minister of Munitions in a Coalition government. It was also understood that the British had insufficient heavy artillery with which to batter strongholds and the front line and the quality and supply of high explosive shells was hopelessly inadequate.

The Canadians were reporting serious problems with the standard-issue Ross rifle and British battalions had too few machine guns due to attrition in battle. There was also a serious shortage of trench weaponry with which to fight once trenches had been captured.

The casualty story was tragic. The French had lost over 102,000 men in their assaults on Vimy; the Germans had lost over 50,000 defending Vimy and Festubert. British and Empire losses at Festubert were just over 16,000 including the deaths of the commanding officers of 11 battalions and the Brigadier-General commanding 141st Brigade.

These were desperately hard lessons to learn but they had to be learnt as the British Army made the transition from colonial police force to continental army. It could not be done without the country moving onto a war production footing. Everything had to change. Over the next four years, everything did.