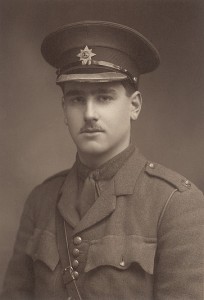 Rudyard Kipling was an ardent patriot who had come to see the war as a crusade against barbarism. He had to pull some strings to get his son into the Army. John had not been accepted by the Navy due to being very short-sighted. The Army took a similar view. Kipling then approached his friend Lord Roberts, who was commander of the Army, as well as being Colonel of the Irish Guards, to see if he could use his influence.

After completing his training, John was sent to France in August 1915. For the battle of Loos in September, the Guards Division were part of XI Corps, one of the three Corps that made up the Haig’s First Army. We know that he was killed by an artillery shell on 27th September 1915. His body was buried but the grid reference of the burial appears to have been wrong. From 1919 onwards, battlefield burials were exhumed and buried in the beautiful military cemeteries that grace this part of France. 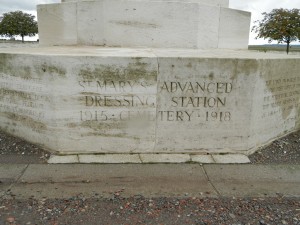 Inscription at the base of the Cross of Sacrifice, beside the road.

In 1992, the Commonwealth War Graves Commission announced that the unidentified body of an Irish Guards Lieutenant buried in St Mary’s Advanced Dressing Station cemetery was that of the missing John Kipling. A gravestone was suitably inscribed and has been visited by many, your author included. However, in 2002 Major Tonie Holt and his wife Valmai, published a book, My Son Jack? which cast serious doubt on the identification. They showed convincingly that Kipling was a second lieutenant when he was killed. He was not gazetted Lieutenant until November, although back-dated to June 1915, and in letters written shortly before his death, he asked his father to have some ‘dog-tags’ made for him in the rank of second lieutenant. Rudyard Kipling did not know of his promotion, when he was killed. 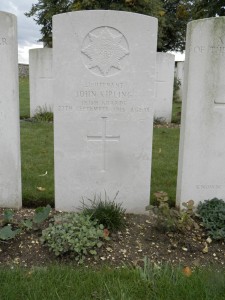 So, maybe it is right that he is still recorded on the Loos Memorial to the Missing at Dud Corner along with more than 14,000 others who fell in that battle and have no known grave. And no doubt his grave in St Mary’s ADS Cemetery will continue to give pleasure to other battlefield pilgrims.