The lessons learned by senior commanders following the tactical success of Neuve Chapelle were false friends. Surprise is a universally recognised virtue in a military plan; surprise had been achieved at Neuve Chapelle. The problem was that it was the wrong sort of surprise! 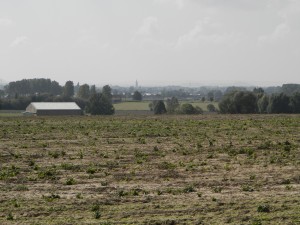 The sector was very lightly held as the Germans did not think the British capable of a major offensive, let alone operating independently. Their front-line trench systems were designed as a sort of sentry line. However, following the bombardment in March, they had worked hard. Brest works were built higher and wider and trenches were deepened. Parados were built on the rear of the trenches to provide improved protection from explosions to the rear. Barbed wire barriers were widened and thickened and, in front of their trenches, laid in wide ditches. Communications trenches were reinforced so that reserves could be deployed quickly from the rear and machine gun posts were built so that every sector could be swept from more than one position. Lastly, reserves were reinforced. The British appeared to be unaware of these changes as they planned their attack a couple of months later. 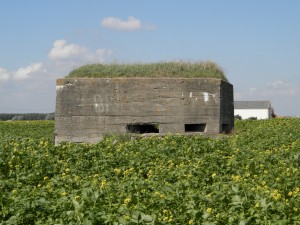 One of a line of bunkers built in 1916 along Aubers Ridge. All had inter-locking fields of view and fire.

Because they misunderstood of the nature of the surprise they achieved, senior commanders thought that a brief bombardment was more effective than a long heavy one. They were helped to this conclusion by a serious shortage of artillery ammunition. British industry had not yet geared up to war-time production and would not do so for another year. Consumption of artillery ammunition had consistently exceeded the scales used to plan production. In demanding more from existing factories, quality had dropped. The fuses were particularly unreliable. The result was that many heavy HE shells were duds, particularly on soft ground. As if this were not serious enough, many of the artillery pieces had exceeded their barrel lives. This made them less accurate for both line and elevation causing them to drop short, often among our own troops.

Why there was such a critical failure of intelligence is not known. Having used the RFC to such good effect before Neuve Chapelle, they appear not to have played such a key role in May. Two factors dominated the thinking of senior commanders; communications and reserves. They were convinced that one of the main reasons troops had not been able to break through the line in March was poor communication, forward and backwards. They ensured that this would not blight May’s attack. Commanders were to be well forward, flags and signal lamps were to be used when telephone cables were cut. Reserves were identified – Haig had two brigades – and these were to leapfrog the assaulting troops when they flagged.

Commanders and staff had planned carefully, lessons had been learned and applied, troops were briefed and there was generally an air of cautious optimism that a successful break-through was possible. But the most important part of any military plan is the enemy and he had been insufficiently studied. His defences were under-estimated and his strength in depth not understood. To make matters worse, much of the ammunition available for the bombardment was shrapnel which had very little effect on wire or men in dug-outs. 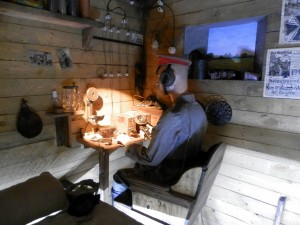 The bombardment started at 5.00am and half an hour later, the troops went over the top, into withering machine gun and artillery fire. The Germans had sited their machine guns behind heavy steel plate at ground level. They swept the attacking infantry at about knee level so that there was no protection even for the fallen. No-man’s land was between 100 and 300m wide; very few of the troops made it across and none in the centre of the assault. The extent of the failure was not clear even as reports began to trickle back to Haig. He was convinced that a new artillery barrage could suppress the machine guns and so ordered another assault at noon. However, as the picture began to clear, he postponed that until mid-afternoon. Further south the French IX Army had had some success near Vimy and Haig was under considerable pressure to attack or relieve French units so they could attack. He therefore ordered another attack at 8.00pm. However, as it became clear that there was insufficient time to organise fresh troops, that too was postponed.

During the night he met with his Corps commanders to discuss whether to launch a night-time bayonet assault without preparatory artillery fire or to wait until morning. Even at this stage, the full extent of the disaster was not clear. They agreed to wait until morning and launch a full assault with artillery preparation. During the night reports from assaulting battalions filtered back to HQs, were consolidated and passed back. Gradually, the full horror of what had happened to the attack that morning became plain. When this was considered, along with the shortage of artillery rounds and the poor condition of many of the artillery pieces, Haig cancelled the planned assault. About 10,000 men had been lost, killed, wounded or missing, for no gain in territory or tactical advantage.

2 Royal Sussex was a battalion of about 850 men that morning. They were in the first wave of the assault. By sunset, they had lost 14 officers (2 KIA, 3 missing) and 583 men. Of the 282 killed, only 20 have known graves. The remainder are commemorated at Le Touret. 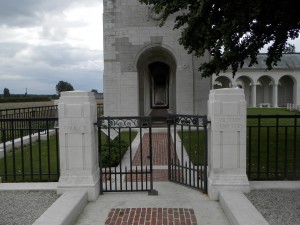 Le Touret Military Cemetery has the names of over 13,000 men who have no known grave as well as those buried there. 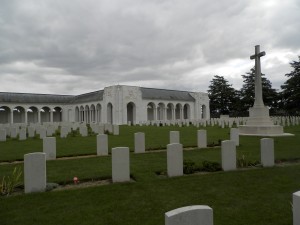 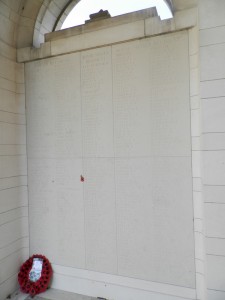