The winter of 1914 had been miserable. The troops in the south of the British sector near La Bassée found themselves in water-logged trenches, often standing up to their knees in water. Trench foot and ague were widespread causing more casualties than the enemy. However, in early 1915 fresh divisions were beginning to arrive from England and the Empire, and British troops were re-organised into two armies; Haig’s Corps became First Army and Sir Herbert Smith-Dorrien’s, the Second. Haig had two corps to command; Rawlinson’s IV Corps consisting of 7th and 8th Divisions and Willcocks’ Indian Division, consisting of Lahore and Meerut Divisions.

The French and Germans both had a low opinion of the BEF. Because it was so small initially, most French assumed that it would be used to relieve French forces by holding quieter sectors. The Germans had similar views and so the ground opposite the British was lightly held. General Joffre was determined to seize the moment when the Germans were fighting in Russia to reduce the bulge into France left following the invasion the previous year. He planned a major offensive attacking from Verdun in the south, from Rheims northward and in the Artois region eastwards onto the plain of Douai. The British were to form the northern part of the attack in the Artois region with a view to capturing the Aubers ridge between La Bassée to Lille. However, French involvement in the offensive was cancelled because the British were unable to relieve French IX Corps north of Ypres. The subsequent battle was, therefore, a British affair. 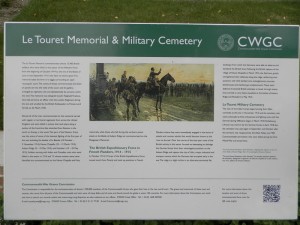 The battle was meticulously planned by Haig’s staff. For the first time, aircraft from the RFC had photo-mapped to a depth of 1,400m the ground over which the attack would travel. 1,500 copies of the map were produced at 1:5000 scale. Although there was a general shortage of ammunition, especially HE, Haig was able to deploy an artillery piece every 6m along the front. 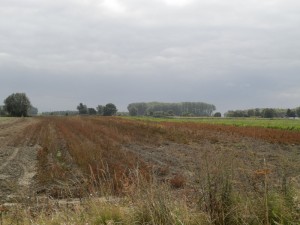 Three brigades from the Indian Corps advanced quickly as the barrage lifted and by nightfall they were in possession of the village. Some advanced units were as far forward as Layes Brook. On a front of about 2km, the Indian Corps’ 8th Division had advanced about 1500m. Overnight the Germans reinforced their second line in the area of Bois de Biez and no further progress could be made, though not for the want of trying.

It was at this point that the fragilities of this new form of warfare began to make themselves felt. Once troops advanced from their trenches, there was little or no communication with their command HQs. Up to that point, communication was done by field telephone connected to switches by cable. The cable was laid along communication trenches but was vulnerable to artillery fire. New cable to the village could be laid but the men doing so were vulnerable to artillery and sniper fire so it was normally done at night. Runners could be sent with written messages, but they were also vulnerable to enemy fire and they often got lost. The result was that commanders often had a very tenuous grasp on the battle and were unable to react to developments. The result was that orders could not be got to the troops in the village nor could reinforcements be quickly sent forward.

Another effect of the difficulties with communication was that contact was lost with the artillery batteries. There was therefore little supporting fire when the inevitable enemy counter-attack came. All artillery fire was pre-planned and registered before the battle. This often sacrificed an element of surprise as well as being inflexible after the attack had gone in.

This operation was a success. A carefully planned operation had achieved many of its objectives and Neuve Chapelle had been wrested from the enemy. It would be held until the German Spring Offensive in 1918. 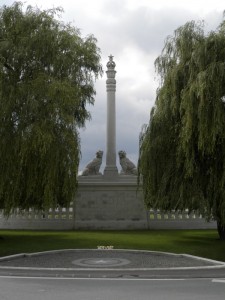 Indian Memorial to the missing

The tactical success was not without a heavy cost. Haig’s four attacking divisions lost 544 officers and 11,108 men, killed, wounded and missing. The commanding officers of seven battalions were killed. The Germans are estimated to have suffered similar losses.

The battle reinforced the lesson that it was possible to break into the enemy lines but that it was another thing to break through them. The depth of the enemy defences made counter-attack inevitable, at which point the absence of artillery support was crucial. The challenges of communication back to the HQs and forward to the troops once they attacked made subsequent planning and coordination almost impossible. Another lesson was the very great challenge of having sufficient reserves and of moving them up in a timely manner to cope with the enemy counter-attack. Very difficult if commanders do not know how the battle is going.