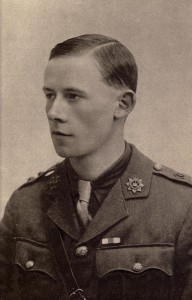 Edward Noel Hodgson was a young man, like so many of his generation, of exceptional ability who died in France during WW1. He was educated at Durham and Christ Church,Oxford. There he gained a first class degree in Classics. Though he wanted to stay on and read Greats, on the outbreak of war, he joined up. He was posted to the Devonshire Regiment. He joined the 9th Battalion at Festubert in July 1915 and took part in the Battle of Loos in September of that year. He was Mentioned in Dispatches and was awarded the MC for holding a captured trench without reinforcement for 36 hours.

February 1916 found the battalion at Fricourt and in April it moved to trenches opposite to the town of Mametz. The British offensive to relieve pressure on the French at Verdun had been scheduled for August 1916. After considerable persuasion from Gen Joffre, Gen Haig agreed to bring it forward to 29th June. The week long artillery bombardment had already began when, on 28th June, H hour was delayed until 1st July, due to bad weather.

On that 29th June, Hodgson wrote this beautiful prayer poem. It reveals that he knew the following day was likely to be his last. It serves as a fine epitaph.

By all the glories of the day
And the cool evening’s benison
By that last sunset touch that lay
Upon the hills when day was done,
By beauty lavishly outpoured
And blessings carelessly received,
By all the days that I have lived
Make me a soldier, O Lord.

By all of all man’s hopes and fears
And all the wonders poets sing,
The laughter of unclouded years,
And every sad and lovely thing;
By the romantic ages stored
With high endeavour that was his,
By all his mad catastrophes
Make me a man, O Lord.

I, that on my familiar hill
Saw with uncomprehending eyes
A hundred of thy sunsets spill
Their fresh and sanguine sacrifice,
Ere the sun swings his noonday sword
Must say good-bye to all of this; –
By all delights that I shall miss,
Help me to die, O Lord.

The battalions of the Devonshires lost heavily that day, but succeeded in capturing Mametz. After the battle they collected their dead and buried them in the trench from which the attack had been launched. A wooden cross was erected on which was carved,

“The Devonshires held this trench. They hold it still.”

That inscription was transferred onto the CWGC headstone that replaced it. 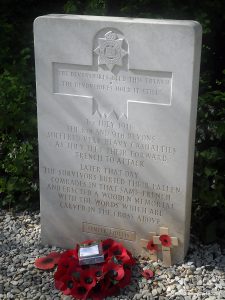