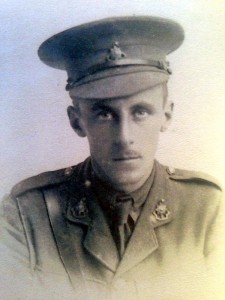 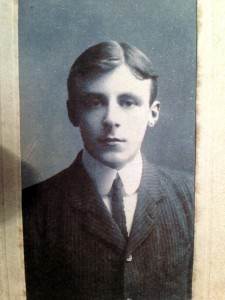 Anson Lloyd Silvester was 26 when war broke out in August 1914. Having read History at Jesus College Oxford and been a member of the Officers’ Training Corps, in 1913 he had received a commission in the Royal Sussex Regiment. He joined his Regiment in Dover. After training, he was shipped over to France with seven other officers and 124 men. 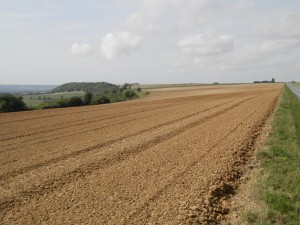 Troyon nestles in wooded valley to left. La Sucrerie at Cerny is where road on right meets horizon.

They joined the 2nd Battalion on the 8th October in the front line just north of the River Aisne. The battalion HQ was in a tiny hamlet called Troyon just below the Chemin des Dames. He took command of 9th Platoon of C Company with Sergeant W Smethurst as his Platoon Sergeant.

This part of the line was not very active although company level attacks by the Germans and daily exchanges of artillery fire made it dangerous enough. It was a good time to get to know his men and to begin becoming accustomed to life in the field. 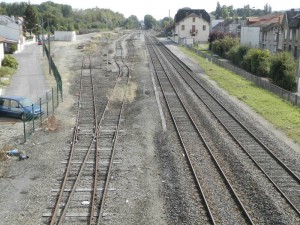 On the 15th October, the Brigade was relieved by French troops and was withdrawn as part of the overall repositioning of the British Expeditionary Force further north to the area of Ypres. He embarked with his battalion at Fismes after a night march for 15 miles across the steep ridges south of the River Aisne. The journey by train took over three days, and they eventually reached Cassel at 3.00am on the 19th October and marched into the town where they were billeted.

At 5.00am on 20th October, the Brigade began a route march into Belgium. As they marched they could hear heavy artillery fire, a sound that was to become a familiar accompaniment to their lives. They billeted in Elverdinghe and then Boesinghe, where they remained for four days. On 23rd October, the new Commanding Officer, Lt Col Crispin, arrived from India and took over command. Two days later, the battalion moved off again on a route march to Ypres which they reached three hours later and found billets. On the morning of 26th October, the battalion moved east of Ypres and formed a bivouac in the area of Haalte. Although fighting could be heard, the Brigade was not involved as it was being held in reserve. The next day, another tentative advance of several kilometres took them into the wood belonging to Herenthage Chateau, which became known as Chateau Wood.

On 28th October the battalion again advanced a couple of kilometres crossing the Menin Road and taking up a position in Polygon Wood. They encountered a bit of desultory shelling that killed two officers’ horses and one man. The battalion diary also records that Sgt Burgess was knocked off his horse, though not injured, bringing up supplies of ammunition and three men were wounded. The following day the Brigade withdrew to their old positions in Chateau Wood and the troops learned that a big German assault was expected the following morning on Gheluvelt. Shelling began in earnest at 10.00am and seemed to them to focus on Chateau Wood. 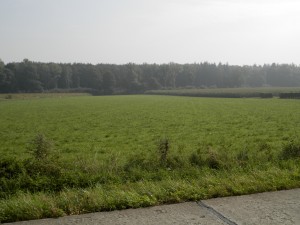 The field over which the battalion marched and in which Lt Col Crispin was killed. Chateau Wood is at rear.

The battalion was ordered to move round to the south towards Zandevoorde. As they set off across fields to the west of Chateau Wood, Col Crispin was killed by an artillery shell that exploded close by. His horse was terrified and galloped off towards Hooge. The battalion continued under the command of Major Green, the second-in-command and took up a position on the eastern edge of what became known as Sanctuary Wood. Over the next two days, the battalion defended various positions around the wood during which time, unknown to them, the most brutal assault was being mounted on Gheluvelt, to their east, and Zandevoorde, to their south. During the fights on 30th and 31st October the battalion lost 5 officers killed and 394 men, killed, wounded or missing.

By the 3rd November, miraculously, Gheluvelt had been held and the sector began to quieten. The battalion was deployed in another wood and, as some of the men had not had water or food for 48 hours, the focus was on administration. With some sense of irony, the battalion received heavy shelling on the 5th November although there was no attack. On 9th November, the battalion was relieved by the London Scottish and moved off to a bivouac at Hooge. For the next nine days, there was almost constant shelling and many low level attacks which, though critical on the 9th, were all held.

On 15th November, 1st Division, of which 2nd Brigade and the battalion was a part, were ordered out of the line. Six days later, in a blizzard, they arrived in Hazebrouck where they received one officer and 86 men as reinforcements. The good news was that officers were permitted 96 hours leave. ALS spent the leave with his parents in Great Clacton, where his father was Rector. Returning on the 23rd, he joined the battalion on route march and rifle training. He may have been surprised two days later to receive a telegram from his mother asking whether he could get to Boulogne to meet her at the Hotel Bourgogne. History does not record whether he made it, although it is not inconceivable.

For the next two weeks the battalion remained out of the line. During this time Gen Sir John French visited to express his thanks for their efforts around Ypres at the end of October and HM The King visited and the battalion lined the streets. On 6th December three officers and 138 men joined the battalion as reinforcements. Training continued intensely until the 20th December when the battalion received orders to move south to Cambrin. Initially, the journey was made on buses, which must have been a novel experience as well as uncomfortable, as they were carrying all their tools and equipment. They continued the march on foot and between 21st and 23rd December taking part in a number of skirmishes during which one officer was killed, two wounded and 28 men killed, wounded or missing. 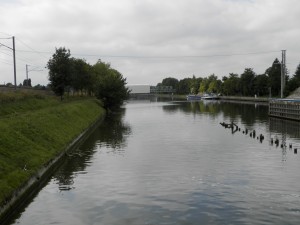 The canal looking west towards Pont Fixe. Battalion was on right bank.

They reached Cambrin on 26th December and took up a position on the right of the British line. The battalion was immediately north of the La Bassée canal just south of Givenchy. The conditions for most of the battalion were appalling, living in shallow trenches half full of water. The 60th Rifles (KRRC) were slightly forward of the battalion to the south of the canal facing the Brickstacks. C Company had ceased to exist due to 90 men being hospitalised with ‘cold injuries’ and so one hundred men of the Northants had been sent to strengthen the battalion. One platoon was held in reserve. Lt Anson Silvester was commanding that platoon. 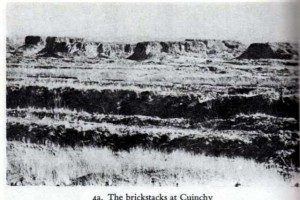 The Brickstacks 1917 from Robert Graves ‘Goodbye to all That’. They remained in German hands until 1918 providing excellent observation.

In the evening of 31st December, the Germans captured the observation position and machine gun post belonging to 60th Rifles forward on the south bank of the canal. A counter-attack to recapture it was planned for 10.30pm that night. B Company plus 9 Platoon (ALS) were detailed. They crossed the bridge to the south bank and patrolled east towards the position with 9 Platoon leading. The Germans had very good observation from the Brickstacks. When they were about 30m from the enemy, they came under heavy machine gun and rifle fire. Anson was hit immediately as were eleven of his twenty men. The fire was too heavy to continue and the troops withdrew. Later that night, another attack was launched by B Company reinforced by 3 companies of Scots Guards and two of Loyal North Lancs. It was successful, although the enemy subsequently mounted another successful counter-attack.

The situation remained static for several weeks and it was not until 11th January 1915, that Anson’s body was recovered. It was buried in the Communal Cemetery at Cuinchy, just behind where he fell. It is still there. 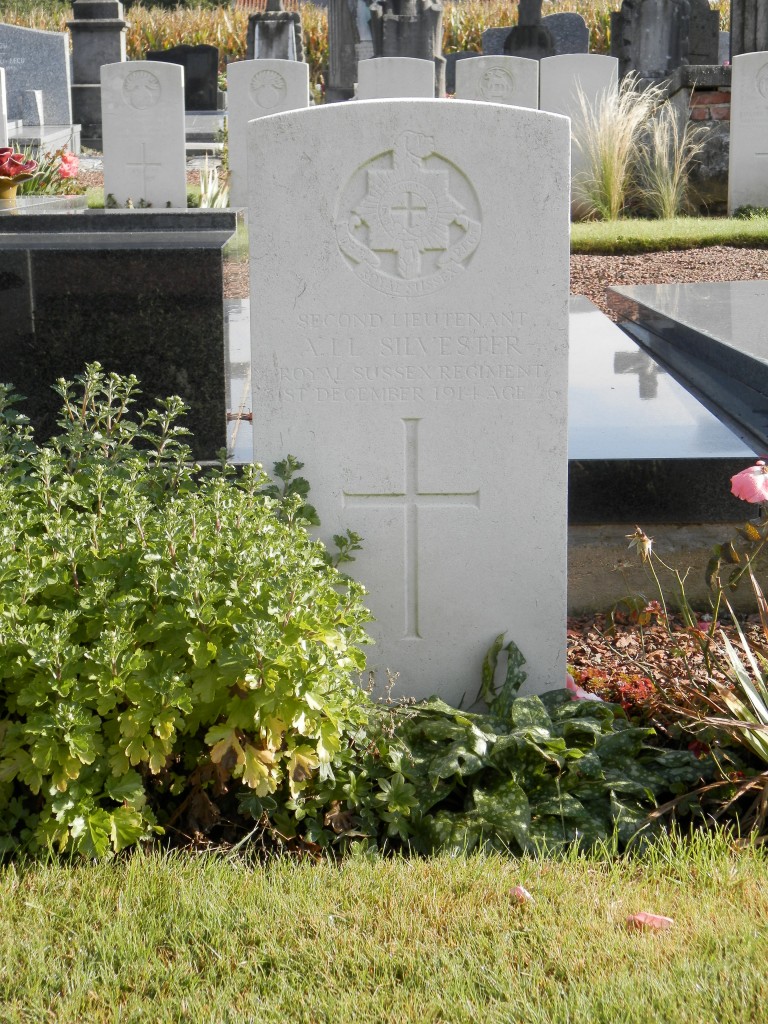 So ended the short and gallant military career of this young man. An hour or so later, the year ended; the year in which the original British Expeditionary Force had ceased to exist and manoeuvre had become all but impossible. Armies were now locked in a struggle of attrition; of men against artillery and machine guns. Now was the turn of the civilian volunteer army. From now on, for the most part, the Germans would defend high ground, in depth. The British would have to attack.

2 thoughts on “A Royal Sussex Hero”