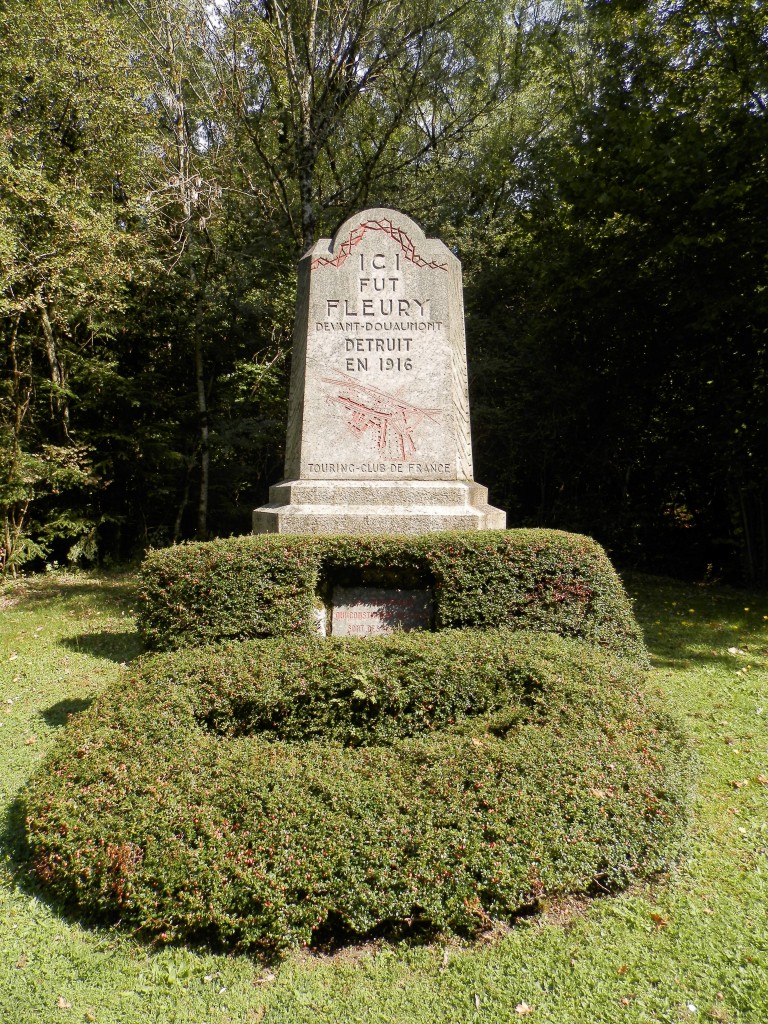 Memorial to the destroyed village of Fleury erected by the Touring Club of France in 1920.

An impasse had been reached on 24th June. German forces were unable to consolidate their gains. They were clinging on, unable to be reinforced, resupplied or relieved. Particularly around Fleury, trenches had been bombarded out of existence and soldiers lived, fought and died in shell holes, the only feature of the terrain. However, they were on forward slopes and every move could be observed and drew instant artillery fire.

However, from the perspective of 5th Army HQ, the nearness of the breakthrough on the 23rd was taunting. Crown Prince William was only notionally commander. His father, the Kaiser, had given him the command with the following instruction:

“I’ve entrusted to you command of the Fifth Army.  Lt. General Schmidt von Knobelsdorf will accompany you as chief of staff…what he tells you, you must do.” 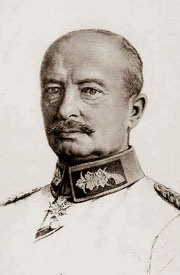 Knobelsdorf was Prussian, stubborn and dogged. He was convinced that his divisions were on the brink of the breakthrough that would capture Verdun and then be able to march triumphantly on Paris. His view was not shared by the Crown Prince or, as far as one can discern, Falkenhayn, the Chief of the General Staff. The omens were not good. Phosgene had lost its terror with the issue of new gas masks to the French; some of his artillery had already been withdrawn and sent to the Somme. His troops were exhausted and depleted and there were to be no fresh reinforcements. 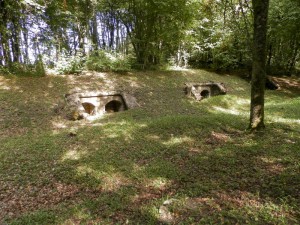 However, there had been some minor successes. Early on 3rd July, German 50th Division had captured the Damloups ‘High Battery’ by clever tactics and cunning. The battery was heavily fortified with concrete shelters that held over a company of infantry. They had repeatedly fought off German assaults but the Germans had gradually crept closer. During the night, the German troops started to bomb the battery with heavy mortars. As expected the French took cover and German infantry crept closer. At the appointed time, they fired the mortars with the fuses removed. Hearing the thuds, the defenders assumed they were duds. By the time they realised their mistake, German troops had captured the battery and its troops (Horne, 1993, p.296). 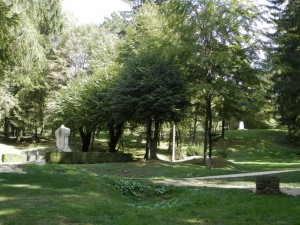 Shell holed remains of Fleury. Crest of slope is line of road by memorial on right of picture showing forward slope position of village.

Then it started to rain. For three days the surviving troops from the Bavarian Lieb Regiment around Fleury lay in their sodden clothes, in waterlogged shell holes, among the dead and dying under intense French bombardment. They watched as German heavy artillery continued to shell Fort Souville and then at mid-night on the 10th, the Green Cross shelling started. Having learnt from their mistake of the 23rd, they continued to gas the artillery batteries until the troops started to advance at dawn. The French had also learnt from their experience and, having issued the new gas-masks, showed remarkable discipline. They waited until the troops were fully in the open before delivering withering fire from their massed guns. It was devastating. 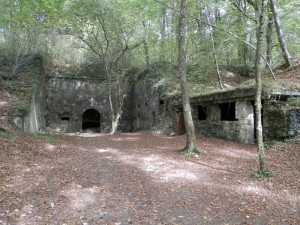 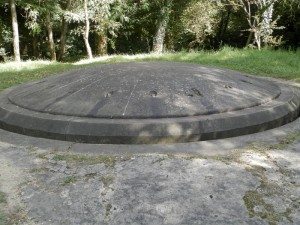 German morale was faltering. The commanding officer of an already depleted battalion, tasked with the frontal assault on Souville reported that he could not continue to accept the consequences of attack and had ordered his men to dig in. By contrast, a Jager battalion had pushed south west from the ‘High Battery’ and captured 217th Regiment of Infantry; thirty three officers and 1,300 men had been captured or killed (ibid). By day’s end, 2,400 French prisoners had been taken.

A confused battle continued on the 12th. At one point, German troops were seen from their Division HQ waving the flag from the top of Fort Souville. Great excitement was followed by an artillery barrage south of the fort to keep French forces at bay. Yet, despite there being no French troops north of the Fort, neither were there any German troops able to exploit the success. Shortly, learning that there were Germans on the fort, a courageous young officer led out a fighting patrol and quickly rounded up the invaders. It turned out that they were a leaderless group who had moved onto the fort to escape their own shelling. 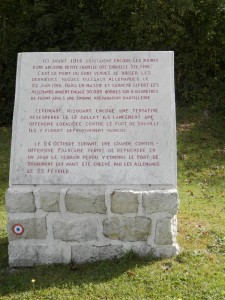 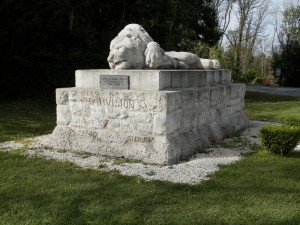 The Wounded Lion monument. Between Fleury and Fort Souville, it marks the furthest advance of the Germans in the attacks of 11th & 12th July 1916.

That was the high-water mark. By the 14th French counter-attacks had pushed the German troops almost back to their July 10th starting line and the last gasp had failed.

The figures are stunningly awful. Between 21st February and 15th July, the French had lost 275,000 men and 6,563 officers. The Germans had lost just under 250,000 men, almost double the number of men in the nine divisions that Falkenhayn had been willing to commit to the battle. Between 65,000 and 70,000 Frenchmen had been killed and 64,000 men and 1,400 officers had been taken prisoner. Over 120,000 French casualties had occurred since the middle of May (ibid). 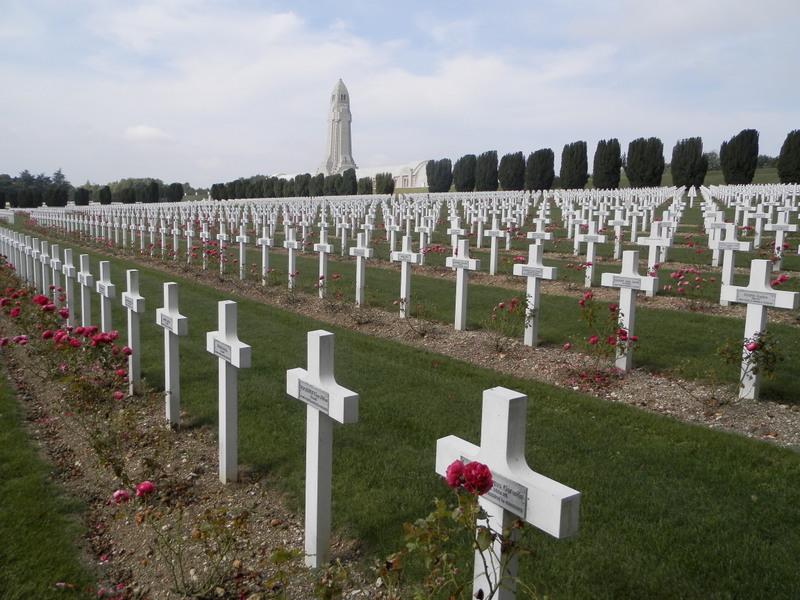 The National Cemetery and Ossuary at Thiaumont.

German artillery had fired about 22,000,000 shells; the French about 15,000,000. The French had ninety six divisions on the Western Front; seventy of these were rotated through Verdun (ibid). Two and a half million men had been transported along the Voie Sacrée to the battlefield over ten months up to October.

To both sides, the ground had become hallowed with the blood of hundreds of thousands of their comrades. It was psychologically impossible for the Germans to withdraw and equally impossible for the French to let them remain there. So the carnage continued, albeit on a smaller scale, until October when France launched a major offensive to restore the line and recapture their forts.