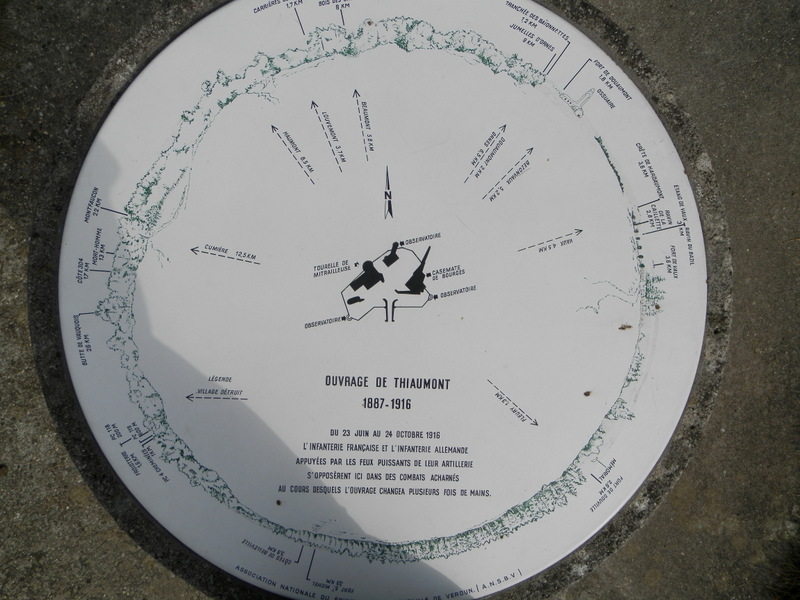 The orientation plate at Thiaumont.

In capturing the forts of Douaumont and Vaux, the Germans had established themselves at the base of both legs of a capital H of high ground. They also controlled the important valleys between, the Fumin Ravine, which ran from the village of Vaux up to the fort and the Chambitoux Ravine that ran up towards Fleury. It now appeared to the military strategists that a major offensive up the valleys between Forts Vaux and Douaumont could capture the village of Fleury situated mid-way across the cross-bar of the H. From there, it was less than 3 miles to the centre of Verdun, and downhill all the way with little in the way of defences. 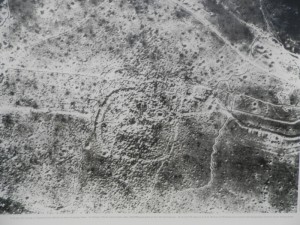 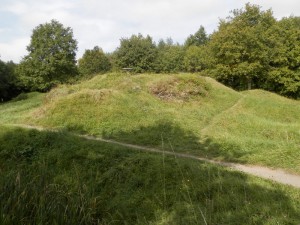 All that can be seen of Thiaumont today.

However, each end of this 2km cross-bar ridge was well defended with Fort Souville at the southern end and the strongholds of Thiaumont and Froideterre at the northern. Fleury was also conveniently on the reverse slope. In order to eliminate the dominant position of Thiaumont, an assault was launched soon after Vaux fell. 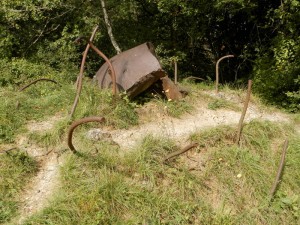 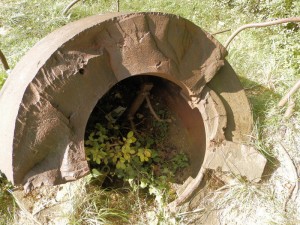 View inside the observation cupola.

It was captured the following day, 8th June, but almost immediately re-captured by the French. Over the summer, it was to change hands fourteen more times, which shows the horrific, intense, close-quarter melee that the battle had become (Horne, 1993, p.267). There was no longer a front line; troops fought from interlocking shells holes, half full of water and foul from the putrescent bodies of their comrades, while enduring the artillery bombardment of both sides. 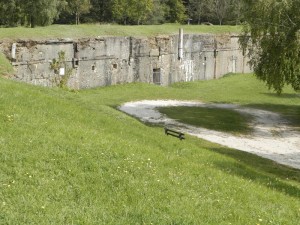 The barracks at Froideterre which remained in French hands throughout. 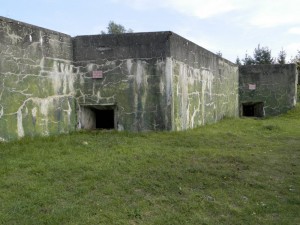 The Bourges Casemate with two 75mm cannon. The camouflage painting dates from the next war with Germany.

For two weeks after the fall of Vaux, it rained. Apart from reducing the conditions under which the troops had to exist to indescribable, it had an important impact on the German plan. Fifth Army had scraped together about 30,000 troops for a final assault to capture Thiaumont, Fleury and Fort Souville. There was an air of confidence about the General Staff that was in no part shared by even the elite troops gathered for the task. Large stocks of a new gas, Phosgene, known to the Germans as Green Cross gas because of the shell markings, had been assembled. Trials had shown that the French gas-masks were ineffective against Phosgene, so a rapid breakthrough was expected. But Phosgene could not be used when it was wet (ibid). 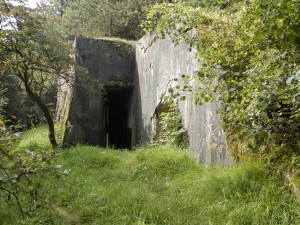 Command Post 120 was not much damaged and provides graphic evidence of the punishment suffered by PC 118 and 119. 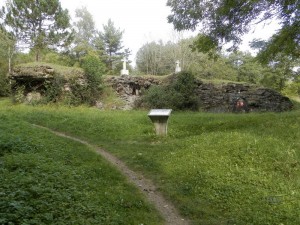 PC 118 was nearest to Thiaumont and suffered worst.

On 22nd June, the artillery bombardment began. It was a beautiful sunny day. That evening the bombardment stopped and was followed by a silent whooshing of shells that did not explode. Too soon it became clear that these were gas shells; it collected in the ravines where artillery batteries were concentrated. Horses broke loose and ran amok, frothing and dying; troops were spluttering. At first light the following morning, the main assault was launched and quickly over-ran Thiaumont and surrounded Froideterre. In the centre, the Bavarian Lieb Regiment captured Fleury and brought up its field guns. However, staggeringly, the French were not overcome. By about 9.00am, their batteries started to fire again, but not before the Bavarians were firing machine guns, at extreme range, into the centre of Verdun. 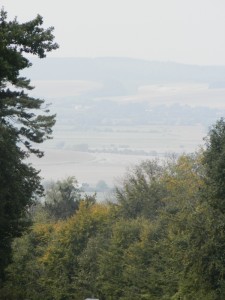 The dominating skyline of Mort Homme from where observers could call fire on the Thiaumont defences. 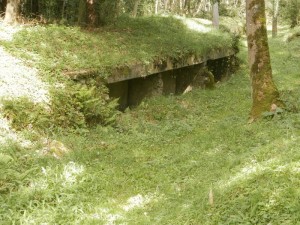 Entrenchment X. A forward position at Thiaumont. On a forward slope and observed from Mort Homme. 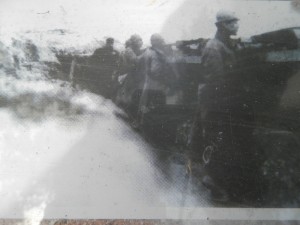 Contemporary image of ‘Poilus’ in Entrenchment X. Concrete parapet was only 0.2m thick.

At Petain’s HQ in Bar-le-Duc, there seemed little to celebrate as bad news poured in. By the end of the 23rd, the position had stabilised but none of the French defenders could be confident about the next day. Again, he petitioned Joffre for the offensive on the Somme to be brought forward. Reluctantly, Joffre released four divisions that he was saving for the Somme offensive. However, despite gains and soaring morale, the German General Staff also had cause to reflect. They had no more Phosgene. French gas masks seemed to have coped with it better than they had anticipated. It had gathered in the valleys and in depressions but had not affected the batteries on high ground. Most critical of all, the Germans had not been prepared to depend on their new weapon and so continued an artillery barrage for three hours after the gas attack, before the assault. This gave defenders some time to gather themselves and prepare for the attack.

Fort Souville had not fallen and French artillery was able to harass the Bavarians in Fleury. Unable to be resupplied with either ammunition or, more critically, water, the Bavarians could not exploit their position. By the end of the 24th June, the Germans were unable to push further south. They were suffering from dehydration and exhaustion and were seriously exposed in a prominent salient. The struggle continued for a further week of fruitless attacks by both sides. Both armies suffered heavy casualties; no ground was gained by either side.

However, on the 24th June, the French Prime Minister, Briand, personally implored General Douglas Haig to launch the offensive. The bombardment began the next day and continued for a week. The Battle of the Somme had started. 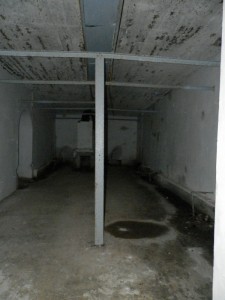 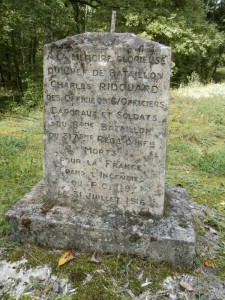 Neglected memorial to Lt Col Charles Ridouard and his men of 317th Regiment of Infantry who were killed in a fire inside PC119 on 31st July 1916.