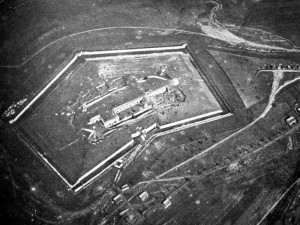 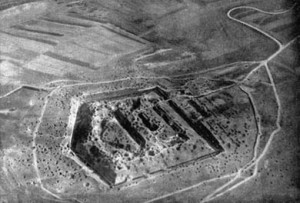 Fort Douaumont was an extraordinary paradox. It was the highest of the series of forts around Verdun with the best fields of fire; it was the most strongly fortified. It was the most heavily gunned and had the largest garrison. Yet it was captured by one man and was subsequently attacked as fiercely by the French as it had been by the Germans. 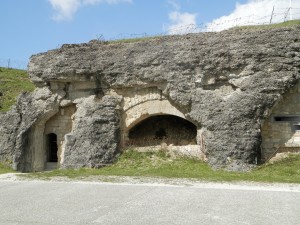 The rear of the Fort showing the original stone construction overlaid with concrete.

It was built after the fiasco of the defeat by Prussia in 1870, as one of a string of forts to protect the French border with Germany. As understanding of modern firepower developed, it was reinforced with huge layers of concrete in the form of a sandwich with layers of compacted sand and earth. It had a garrison of 500, part of the 66,000 men responsible for the defence of Verdun. Unlike today, the area surrounding it for some miles was clear and so it had excellent fields of fire over likely German approaches (See photos above). The Germans were aware of it and considerably daunted by the prospect of attacking it.

Since their humiliation forty years before, the French Army had made a remarkable recovery. They had resolved never to be caught again sitting and waiting for a German attack. The spirit of the offensive had been inculcated in all ranks and this had led to the development of strategy that owed nothing to the intentions of the enemy. Whatever the Germans were going to do, the French were going to mount an offensive into their flanks, at the outset. This worthy élan had permeated even the officers of the Deuxieme Bureau (Intelligence or G2) who seemed to look for evidence to support their pre-conceptions rather than understand what the enemy was doing. The result was a General Staff that was blissfully unaware. 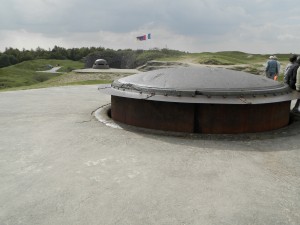 The 155mm turret with the smaller observation post behind and slightly left. 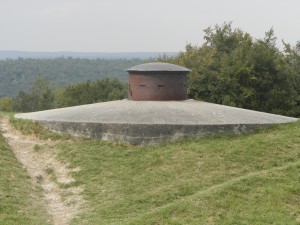 Worse, when the Germans attacked the defensive forts in Belgium and at Mauberge they deployed siege weapons not before seen. Huge calibre 420 (17 inch) and 380mm canon had battered the forts which had crumbled under the weight of their shells. This suggested to the French General Staff that such defensive forts were no longer useful. Pressed hard further north, Joffre had authorised the removal of most of the guns and troops from the forts and their deployment to the field army. The result was that Fort Douaumont was held by the elderly Sergeant-Major Chenot and 56 Territorial gunners. There were no officers, no communications and no orders. Only the 155mm turret and the 75mm turrets remained. There were no observers and they had no idea where the enemy was. The barrage had been concussing and apart from the 155 turret which was firing on pre-registered targets, the rest were unmanned. The men were sheltering in the lower levels.

Into this contradiction, happened the adventurous Pioneer Sergeant Kunzefrom the 24th Brandenburg Regiment, who was commanding a section on the left of their line. Having entered the fort, he heard French voices in a room and promptly demanded their surrender. No shot was fired. He then locked them in the room and happened across a kitchen, from which he helped himself to a hearty meal. While he was feasting, two officers with their platoons, from the same regiment, also gained entry, via a different route. They organised the defence and sent triumphant messages back to their regiment. Still no shot had needed to be fired. 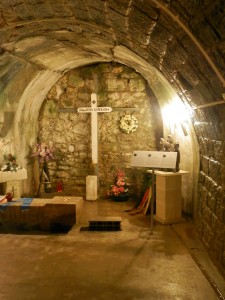 The Rue du Rempart was walled up as final resting place for 679 officers and soldiers.

Fort Douaumont now became a German garrison, supply dump and hospital. It was to prove a mixed blessing. On 8th May, a cooking fire spread to flame-thrower fuel, ammunition and grenades and in the resulting inferno, 679 officers and soldiers were incinerated. They are interred in a tomb on part of the circular Rue du Rempart.

On 24th October General Mangin mounted an offensive to capture the fort. For two days, huge 400mm railway guns had bombarded the fort. One of these shells had penetrated and exploded in the area of the hospital killing all inside it. The Germans had abandoned the offensive against Verdun in July and, following this disaster, ordered the garrison to prepare to abandon the fort.

General Mangin ordered a Moroccan Infantry regiment, a battalion of Senegalese Tirailleurs and three companies of Somalis to recapture the fort. They did so in four hours taking 5000 prisoners but losing 23 officers and 829 soldiers. The original garrison was 500. That the Germans had ten times as many in the fort at its capture, shows how it had come to be seen as a refuge. They knew it affectionately as ‘Old Uncle Douaumont’. 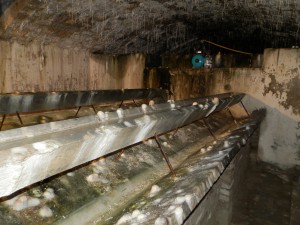 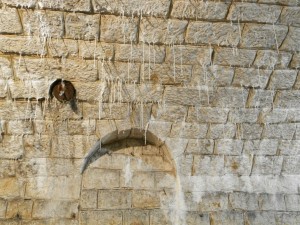 Stalactites forming from roof of room.