For nearly two weeks, Chasseurs from 56th and 59th Battalions (Bn) had huddled from the bitter cold in muddy, wet strongholds sited throughout the Bois des Caures, about 14km north of Verdun, as the carrier pigeon flies. They were the front line and their orders were simple: to hold at all costs. 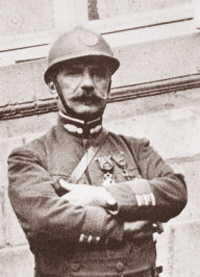 Sensing that they were on the eve of trouble, on the 20th February, Col Driant, commanding both battalions, sent a dispatch that revealed he understood how difficult life was about to become.

“The time has come for officers and men of both battalions to prepare for action, and for each to reflect on the role that will be his. At every level, we have to feel that we have a sacred duty and that, in a struggle as divided as that which is about to be fought, no-one remains inert on the grounds that there were no orders to the contrary.

There will be many breaks in communications, many occasions on which groups of men will be left to fend for themselves. Resistance and halting the enemy by every possible means must be the thought uppermost in everybody’s mind.

Chasseurs should remember, in particular, that in the battles that they have taken part over the past seventeen months, they left no prisoners in enemy hands other than wounded soldiers. Chasseurs do not surrender.”

Early in the morning of the 21st February, it became that difficult. German artillery preparations had been awesome. The plan was based on the premise that the artillery would blast a gap in the French line that the infantry among the 140,000 men assembled for the attack would simply occupy (Horne, 1993, p.41). Over 300 field guns and 542 heavy artillery pieces were concentrated on the 8 mile front. These were backed up by mine-throwers and finally flame-throwers. Two and a half million shells had been stockpiled for the six day plan (ibid). 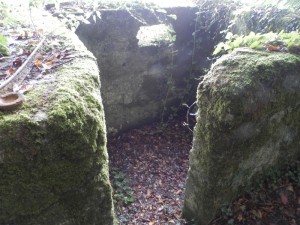 Observation post in the front line, on the edge of the wood. 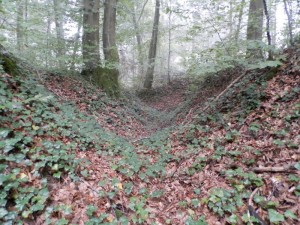 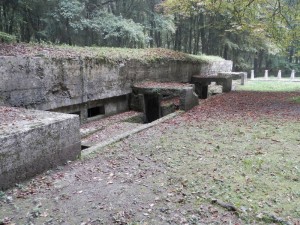 Col Driant had planned the defence as a series of strongholds joined by communication trenches. In the front line outposts were lightly held. In the centre of that line, the Chasseurs were in a wood-line on one side of a field, across which in a wood-line 200m away, facing them were the enemy. Further east, the lines were only 30m apart.

These outposts were joined to the Grandes-gardes, strongholds that were company command posts and were manned by a platoon of about 30.

Behind these was a support line and 500m further back, the R line with concrete bunkers, the final line of resistance. 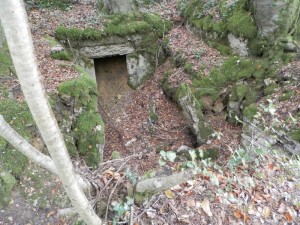 Yet further back was the First Aid Post in another small concrete bunker, seen to the right, and the supplies.

These trenches, though neglected for 98 years, are strikingly visible in the woods that have grown up over the battlefield.

The Chasseurs survived the initial bombardment, somehow. On the German left and centre, they were hardly able to advance, so fierce was the fighting. But on their right they made better progress and reached the R line with little difficulty. However, without reinforcements, and with daylight closing in, they withdrew. Col Driant had little idea of how the day had gone as the bombardment had cut all telephone lines. In the evening he went forward to speak to the troops. He found them in good spirits and confident of the morrow, despite heavy casualties. All he could do was to encourage them.

At 7.00am the next morning, the bombardment began again. It lasted for 5 hours. It was focussed on the front line in order to prevent any thought of counter-attack. Gradually, despite deploying every spare man, the Chasseurs were beaten back. By mid-afternoon, largely out of ammunition and fighting with bombs and bayonets, they had been forced back to the area of R2, Col Driant’s command post. A German 77mm was brought up to fire over open sights at the command post’s troops. It was desperate. Driant ordered the withdrawal. After taking farewell of the troops in the First Aid Post, Driant crossed the road. 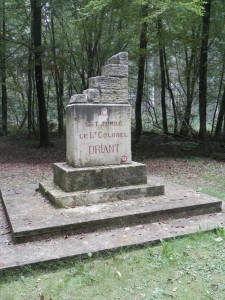 Shortly further on, he stopped to tend a wounded Chasseur. Standing up from doing so, he was hit in the head by a bullet. His last words, recorded by a Chasseur who was with him, were,

This monument marks the place where Col Driant was killed. 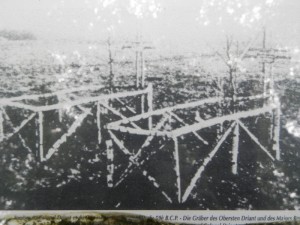 He was subsequently buried by the Germans in this field grave with one of his battalion commanders. 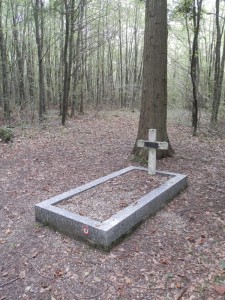 After the war his body was moved and this simple grave marks where he used to be buried.

This picture is taken from the same spot as the one above. It is striking how different is the terrain. 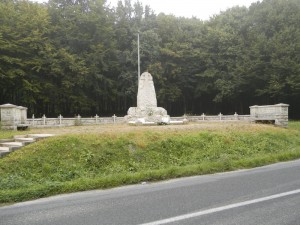 He was reinterred here, under this memorial to him and his Chasseurs. He is buried with 13 unknown Chasseurs, each of whom have a cross round the edge of the monument.

Very few Chasseurs survived but they had delayed the German advance by 48 hours. This was crucial. They had done all that had been asked of them.