Last night we went to see an opera, Rossini’s ‘La Cenerentola’. It was broadcast live from the Metropolitan Opera in New York, one of the world’s great opera houses.(see below) 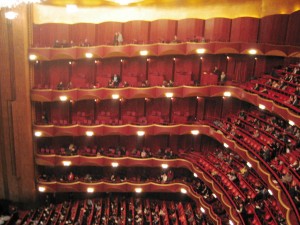 We are able to see operas in two places, The Regal Cinema in Evesham and Cineworld in Cheltenham. We chose the Regal as it is local, a delightful art deco cinema that has been given a new lease of life by a London based entrepreneur. It was an opera that neither Moira nor I had seen; itself a slightly surprising fact as it has been a staple of the repertoire for decades. We knew from reading about it and a few well chosen You Tube extracts that it was based on the story of Cinerella, it was a comic opera and that it was vocally challenging for the cast. We were not really prepared for such a sparkling, brilliant display of singing and acting.

The singing was remarkable as it is very difficult to get right. The reason is that it involves techniques developed as part of what is known as ‘bel canto’, an explanation for which can be found in this New York Times article. In essence it involves training singers to perform smoothly across the registers and ‘effortlessly’ to include all sorts of trills, scales and embellishments. In La Cenerentola, Angelina (Cenerentola or Cinderella) is the principal part and her role builds from smooth and subdued, as she observes her place in the ashes, to brilliant, sparkling, ornately decorated pieces at her wedding to the Prince, at the end. To show you what I mean, here Joyce DiDonato sings the final aria.

If her role was the only sparkling example of colorutura singing, it would have been special. However, it was not. Four men provided an astonishing accompaniment. They were the Prince, his valet Dandini, his tutor Alidoro, and Angelina’s step father Don Magnifico, a parody figure. They sang at various points in twos, threes and all together. Their arias were amazing for the way that they started steadily and became faster and faster. This technique is very difficult and I doubt could have been accomplished as well were they not all Italian.

Singing however brilliant, on its own, only makes a concert; combined with acting, it becomes an opera and the

acting by the cast was terrific. The two awful sisters provide an essential foil to the beauty and goodness of Angelina. With their fatuous father, they provide a genuinely comic sub-set to the piece. They inter-acted so well and continuously that they created a parody of the family we can all imagine, and some of us may even know! Their father’s vainglorious attempt at personal agrandisment through the marriage of one of his daughters to the Prince is comic in its hopelessness and pathetic in its attempt at undeserved fame.

The Prince’s entourage are excellent. There is a beautiful scene in which Alidoro, the tutor, disguised as a beggar is given food by Angelina. He then reveals himself in the guise of an angel, complete with golden wings, and explains that she will go to the ball, he will protect her from the ire of her family, and she will be richly rewarded for her kind and generous spirit. The valet plays an important role as he initially pretends to be the Prince. The awful sisters are smitten with him allowing the Prince to discover the girl his tutor has found. Even when Dandini reveals that he is only a valet, the girls and their pathetic father refuse to believe it until they are kicked out of the palace. 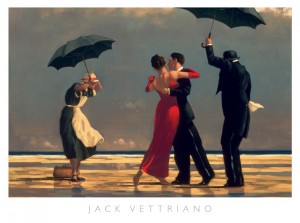 Last, and easily overlooked are the chorus. Dressed in dark suits, red ties and sporting bowlers, they provide continuity and the men tasked with finding Angelina. They never occupy the foreground but play an essential role in making up the crowd. We thought that they looked like people from a Jack Vetriano painting!, such as this one!

In short, this was an utter revelation to us and one that we enjoyed enormously. Perhaps not an opera that one would use to introduce someone to the genre, but highly recommended for anyone who enjoys Rossini. Angelina said, at one point, that she did not want the Prince’s throne, she wanted to deserve it. On the basis of this performance, she deserves the highest accolades.