I sometimes wonder how it is that I find myself living in a place that is so quintessentially English when, for nearly a decade, my dream has been to live abroad. I find the fact so surprising that there is almost a disconnect between my reality and my perception of myself. It gives to life an almost dreamlike quality to which I am still adjusting. Not everyone will have heard of Broadway or know where it is. So I thought I would tell you something of it, through the words and thoughts of those to whom it represents the “ideal of the perfect English village”.

The village was named Broadway for the wide, yellowish road that used to be on the important route from Worcester to London. Sitting, as it does, just below the escarpment and climb up and over the Cotswolds, it was a useful point at which to change horses for both the coaches and wagon trains that daily passed through the village. 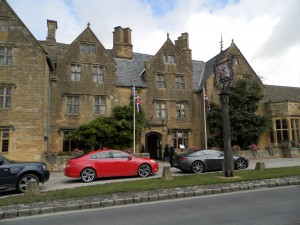 Inevitably, this gave rise to all the trades needed to service the traffic and passengers, including, apparently, 33 public houses. This continued until the arrival of the railway in the 1850s, after which much of the traffic was diverted and, in the late 1800s, the village became a prized retreat for painters and writers who valued its rustic charm.

The crushed yellow Cotswold stone that preserved the road from becoming a quagmire, was replaced by the more familiar tarmac after the second world war. This was a time when many of the buildings fell into disrepair; the village suffered from the stringencies of those years. 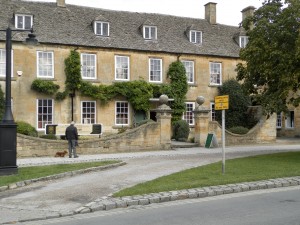 With returning prosperity and the ease of travel, came urban folk and some consider that it then lost the character of a village. The village benefitted from the enormous increase in property values as the Cotswolds became recognised as highly desirable for their beauty and convenience to both London and Birmingham.  More recently, it has attracted successful retired folk, giving it a renewed prosperity and attitude. The fine, old, Cotswold stone buildings are now daily photographed by coach-loads of tourists visiting this well preserved corner of England. It appears that it still represents an imagined ideal of what a village in England should look like. 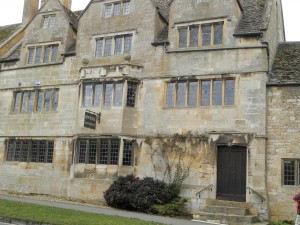 Much of what I have described would seem unremarkable to those used to the leafy, prosperous villages of southern England. The contrast with West Yorkshire could hardly be more stark. Much of what can now be seen in Yorkshire, owes its existence to the invention of industrialised spinning in the late 17th and early 18th centuries. Mills were built in steep valleys where flowing water was available to power the mills. The villages that grew up around them, often built on the steep sides of the valleys, existed, through the 19th century, in a dense smog created by burning coal both for the mills and domestic use. Working six days a week from 6.00am to 6.00pm, the people seldom saw sunlight and lived in tall tenements without glass in the windows, piped water or sanitation. Lives were short and child mortality was high. In 1850, the average life expectancy in Bradford was 18.5 years.

In the 1930s, cloth was being produced in India more cheaply than in England and the mills began to struggle to be economic. After the second world war, returning servicemen were unwilling to accept the low wages and poor conditions in the mills. The result was that many mills were abandoned. Since there were few other opportunities to earn a living, there was an exodus from the valley towns, leaving them impoverished and the tenements derelict. In the early 1960s, one could have bought a tenement block in Hebden Bridge for £20.00. A three-storey terrace house with cellar cost £250.00.

In an attempt to recruit cheap labour, offices were set up in Pakistan and India to recruit workers to keep the cloth mills running. Many did come attracted by wages that could only be dreamed of in their native countries. They settled in many of the mill towns, particularly around Bradford and were, in time, joined by their families. Even this labour could not make the mills economic in the face of competition from abroad and the discovery of new materials, such as nylon. By the 1960s, almost all had closed down creating an industrial wasteland.

Though the smog has gone as coal has been replaced, many who live in West Yorkshire still live in the valley towns. It is a gritty and harsh existence whether in the valleys or on ‘the tops’. The weather combines with the landscape to provide a challenging back drop to earning a living. Little industry has returned to the valleys and most are employed in service industries and retail, though without the benefit of the prosperity that has blessed southern England.

Looking back I can see how the gritty, harsh environment breeds a resilient people. It has its effect on visitors, too. I cannot say that I cared for the area or enjoyed living there. In such circumstances one creates his own pleasures, but the abiding impression of ten years living there is one of darkness; rather as for the short, hard lives of the 19th century mill workers.

The green, open, gently rolling hills and ancient fields around Broadway are redolent of their pastoral history. They were used for a thousand years by the monks of the religious orders much as they are now, before the monasteries were destroyed (1538). 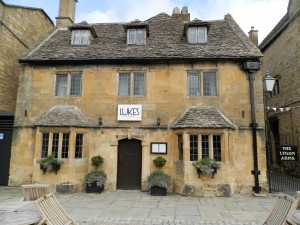 The village itself has preserved many of the fine Cotswolds buildings and, as a result, much of its impression of an ideal country village. Buildings on the High Street are set back on both sides, contributing to the impression of a ‘broadway’ through the village. In this, they were assisted by nature as two streams ran either side of the road. These were not piped underground until about 1900 by which time, all of the High Street buildings had been built.

So, desiring to live in the warmth and informality of southern Europe, I find myself settling in one of the most English of English villages. Wishing to bask in the heat of the Mediterranean, I find myself subjected to, what my uncle in the 1950s characterised as ‘the continuous natural disaster that the English call their weather’. Seeking the freedom of life on the road, I am involved in the politics of this lovely corner of the village.Instead of painting, I am studying with the Open University.

Life is indeed full of surprises.