I tackle the subject of living in a motorhome in France, full timing, with some trepidation. There are many who have done it better and for longer than me; I have included some of their blogs in my Links page. My brief month on the battlefields around Ypres and near Paris, however, taught me so much that I feel I should offer some of the insights gathered. 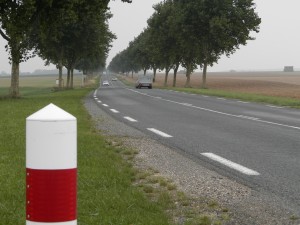 When I designed and built my motorhome, I specifically wanted to be able to wild-camp and use aires, most of the time. This means that little that I have installed works on 230v; most everything runs on 12v systems. So there is no microwave cooker, kettle or hairdryer. As I travel and, in my motorhome, live alone that is no issue. I have installed an LPG system that runs the water heater, plinth heater and cooker. I now know that used sensibly, there is enough LPG to last me about a month. In Europe, that is no great advantage as LPG is plentiful, but I had hoped to be able to spend the winters in Morocco and there there is no LPG. So that defines how long I could stay there.

It is quite extraordinary how much more welcoming, than England, the European countries are to their citizens travelling in motorhomes. 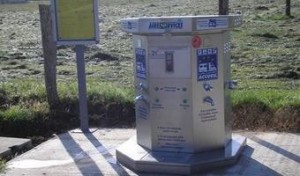 Aires and service points are often signed in many towns. Space is provided for, what the French call ‘camping-cars’ to park and local shopkeepers sell the ‘jetons’  or tokens that are needed to access water and electricity. Typically at an aire, one gets 10 minutes of water and 50 minutes of electricity for between 2.5 and 4.5 Euros. This is sufficient to fill one’s water tank and rinse out and flush the canister of the loo. One English couple I spoke to, travelling in a French motorhome, used their 50 minutes of electricity to tune in to watch some of the Italian GP. Moreover, I felt that the aires were safe. I suppose that it could be observed that, as they concentrate motorhomes in one place, they make hitting them easier. I never felt that was a threat.

Not only are aires plentiful and well signed, but there is considerable scope for finding one’s own spot to spend the night. I enjoyed the process of imagining where I might find somewhere, out of the way of traffic, where I could relax on my own. France is so much less crowded than England and so much more agricultural. As a matter of fact, France is 4 times as large as England with similar populations; France has just less than 64m people compared with England’s 56m. The combination of being less densely populated and more welcoming of motorhomes creates many opportunities. On my penultimate night, I found a lovely spot, right on the cliffs overlooking the sea. It was at the end of a single lane metalled road, ‘Chemin de Mer’ where it turned towards a small hamlet of farms. I was undisturbed until the morning when shooters came and parked nearby before stalking the fields for hares. 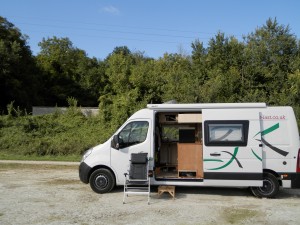 On my arrival at Troyon, just below the Chemin des Dames (see earlier post), I was able to park on a flat space that had been cleared by the adjacent farm on the site of the old village. Though cleared by them, the land did not belong to them and provided a lovely spot for the night. It allowed me to walk down to the military cemetery and take photos as the sun was setting, before wandering back for supper. Of such delightful moments is wild camping made. 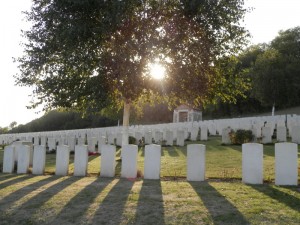 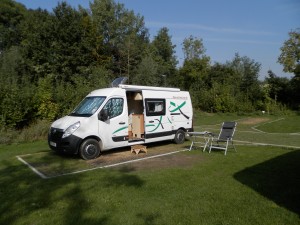 When I arrived in Ypres, I knew that I was staying for two nights and decided on a campsite for the advantage of good showers and proximity to the town. I was surprised by how many of the site’s occupants were from England. The site, being close to the town, allowed me to walk in to spend the day visiting the Museum and Menin Gate. 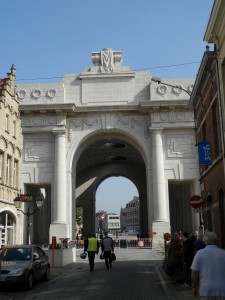 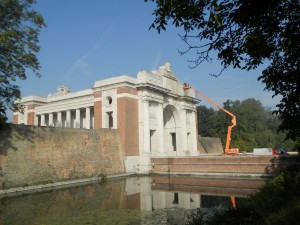 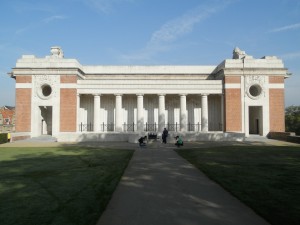 During 1914, there was no gate but the Menin Road left the town over the bridge on its way towards Hooge and Gheluvelt, towns soaked in British and French blood. Later during the War, it became too dangerous to use and troops left via the bridge in the south. After the War ended, it was chosen as the site to commemorate those lost in the Ypres Salient, those with no known grave. Sir Edward Lutyens designed a beautiful triumphal arch, on the walls of which are the names of the lost. For many years now, the Belgian Fire Service and others have daily played ‘The Last Post’ under the Menin Gate at about 8.00pm It draws crowds of all nationalities to the spectacle, some of whom are remembering those lost.

As well as visiting Ypres, the two days had also allowed me to spy out the land and discover that between the camp site and the moat around the town, there was an area of parking that was extensively used by motorhomers. It was ideal and the next day I moved there to have a day to write about my reconstruction of the 1914 battles. As I always have the side sliding door open, it extends an invitation to passers-by to talk to me. While at this spot, I had a delightful couple of conversations about motorhoming and the battlefields. 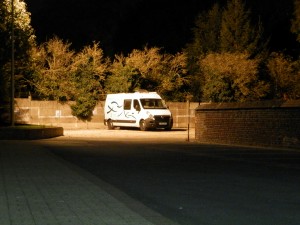 On another occasion I was looking for somewhere and time was marching on. As I drove through the centre of a small village near Armetieres, I spotted that the ‘Marie’ or town hall, had an extension to its car park, at the back, that was used as an overflow. It was next to the village rifle range and an ideal spot. There was also a stand selling hot take-away food, next to the road, had I needed it. Another great night’s wild camping at no cost. 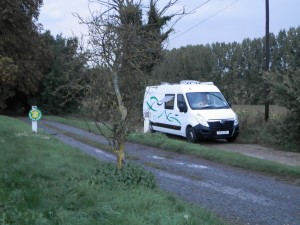 Further along towards Paris, travelling on the D roads, I saw a sign on a track indicating a ‘Gite Rurale’ Beside the track between the maize fields was an old track now used by no-one. I was able to pull onto it, and enjoy a pleasant evening and thunder storm. As I was getting ready, in the morning, to get on the road, the local police pulled up beside me. Having asked what I was doing and looked at my papers, they wished me well and advised me to take care as there had been burglaries. I suspect that there is little in most motorhomes to interest a serious villain and in a self-build probably less than those. Either way, I was never troubled by anyone and certainly none with criminal intent. Perhaps their warning was more of an encouragement to use recognised spots, in which case it had little effect.

Not all of the spots I chose would have been thought ideal by those of delicate disposition. 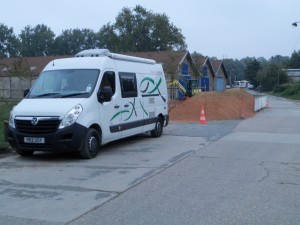 At Versailles, the campsite I had planned to use, which was within walking distance of the palace, was, I was informed, closed for use exclusively by an association who were parked there and enjoying the evening sunshine. I thought that perhaps it was because I was English. A short while later a French motorhome, with the same intentions, pulled up. I explained the situation with the site and suggested to the man that he approach them to see if they would accept a Frenchman. He was no more successful than me and after a brief discussion he and his wife decided to head off to another site some kilometres distant. I had parked on the concrete road in front of a large pile of sand, dumped there for some planned roadworks. The location was safe from traffic as vehicles coming towards me would be on the other side of the road, those from behind had the sand to drive around. However, the road led to the local bus depot and so all evening busses were coming and going. I was not disturbed by this and spent a pleasant and restful night before driving several hundred yards in the morning to park nearer the palace. I walked in and was delighted to know the motorhome was only yards from the side entrance gates when I finished. 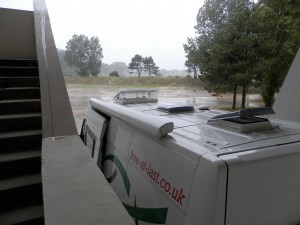 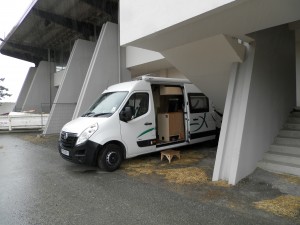 On another occasion, I spotted a rather grand stadium that had clearly had a major horse trial recently. I could see where the horseboxes had been lined up with their electric hook-up points. Those were not now live, but I was able to tuck the van under the stands and avoid the worst of the very heavy thunder storm that night. The few workmen clearing up the straw and taking down tents didn’t bat an eyelid at my presence.

So, if you are new to motorhoming in France and Belgium, I encourage you to be adventurous with your choice of spot to overnight. It is so much more fun than just checking into a campsite. People are much more likely to talk to you if you are on your own and one of the attractions of living in a motorhome, is that you get to know the people around you. Have fun!