Almost every society has awards to recognise the contribution made by exceptional individuals. Prominent among these are the chivalric awards; those for gallantry above and beyond the call of duty. They exist, and are awarded, for a variety of reasons. The proximate justification will be an act of gallantry so conspicuous that it calls out for recognition. They also serve to encourage others by the example set and recognised and they provide a hero on whom the public ‘back home’ can focus their adulation. This helps the war effort by keeping the population supportive.

Occasionally, very occasionally, there arises an individual whose valour is so exceptional that they become part of legend. Captain Noel Chavasse, the Surgeon-Captain of the 10th Battalion The King’s Liverpool Regiment, The Liverpool Scottish, was such a man. 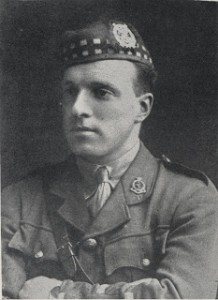 The Liverpool Scottish deployed to France in November 1914 and moved to the area of Ypres in March 1915, in time for the Second Battle of Ypres. A few months later, in June, they were heavily involved in the Battle of Hooge, just east of Ypres. Noel was recommended by his Commanding Officer for the Military Cross for his actions during the battle but all the citations were lost and no-one in the battalion was decorated. However, he continued to display conspicuous gallantry rescuing men from No-Man’s Land and in January 1916 was awarded the MC which he received from King George V at Buckingham Palace in June 1916.

At the end of July 1916, the battalion was moved to the Somme near Mametz in preparation for an attack on Guillemont in early August. The attack went in on the morning of the 8th and that evening Captain Chavasse was out with stretcher bearers recovering the wounded. For his gallantry over the two days and nights he was awarded England’s highest honour, the Victoria Cross. His citation in the London Gazette in October 1916 read:

“During an attack he tended the wounded in the open all day, under heavy fire, frequently in view of the enemy. During the ensuing night he searched for wounded on the ground in front of the enemy’s lines for four hours. Next day he took one stretcher-bearer to the advanced trenches, and, under heavy fire, carried an urgent case for 500 yards into safety, being wounded in the side by a shell splinter during the journey. The same night he took up a party of trusty volunteers, rescued three wounded men from a shell hole twenty five yards from the enemy’s trench, buried the bodies of two officers and collected many identity discs, although fired on by bombs and machine guns. Altogether he saved the lives of some twenty badly wounded men, besides the ordinary cases which passed through his hands. His courage and self-sacrifice were beyond praise.”

It was not just against enemy fire that Capt Chavasse was fearless. Shortly after his award, he was in hot water with his superiors for writing letters critical of the RAMC. He had criticised the working of a Field Ambulance and he was very critical of the way men with venereal disease were being treated. Despite being posted to a Field Hospital for several months, as a result, he refused to back down but by the end of 1916 the storm had blown over and he was posted back to his battalion. 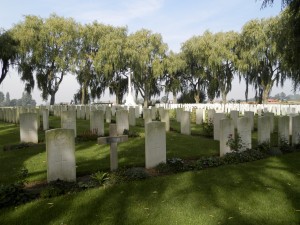 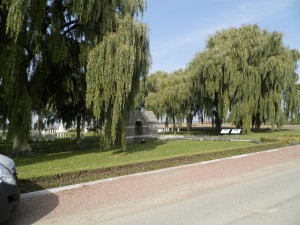 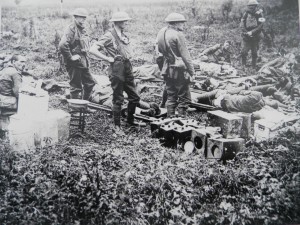 Many of the cemeteries in France are located near to where Casualty Clearing Stations and Hospitals used to be. This particularly beautiful cemetery (above), called ‘Le Trou’, the Hole, is on the site of a Regimental Aid Post and Dressing Station in 1915. As you can see from the contemporary photo (right), such locations were more administrative than clinical.

Over the early months of 1917, the battalion was involved in various attacks and ‘the Doc’ as he was known would have been kept busy. At the end of July, the battalion was ordered up to Weiltje, near Ypres, in preparation for the infamous Third Battle of Ypres, otherwise known as Passchendaele. He occupied a major dugout that could house several hundred men, was proof against artillery and had electrical generators for light and pumping out water. The attack started before ‘first light’ and, with the assistance of a ‘tank’ that broke through the wire before being hit by artillery, the battalion achieved its objectives by 7.45am. Captain Chavasse moved his aid post forward to a captured German position at Setques Farm where they came under constant fire. The aid-post was small and all he could do was to patch soldiers up before sending them back. During the day, Noel was wounded in the head by a shell splinter when indicating the way to his aid-post, which may have fractured his skull. He was treated back at the Weiltje dug-out but then insisted in returning to his aid post where the stretcher bearers had brought many men for him to treat. As night fell, he set off, in pouring rain, to find the wounded. 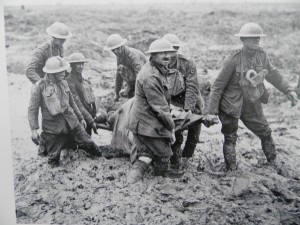 The next day, assisted by a German medic, he tended the wounded. At one point, he left the dug-out to call in the next man; a shell flew in through the entrance killing those within. He may have been further injured in this incident. About 3.00am, Noel was sitting in a chair in the dug-out trying to get some rest. A shell exploded near him killing everyone else and seriously wounding Noel. He had a gaping abdominal wound that was bleeding profusely. He managed to crawl up the steps and through the mud to a neighbouring trench belonging to the Loyal North Lancs where an officer, Lt Charles Wray, attended to him and had him evacuated.

He was taken to Casualty Clearing Station No. 32 at Brandhoek which had become the specialist Hospital for abdominal wounds. There he was operated on immediately and after the removal of shell splinters regained consciousness. However, his injuries were too extensive and he died peacefully in the afternoon of 4th August 1917. He was buried the following day and although no formal arrangements were made, the London Scottish paraded and every doctor from the hospital was present. His death was announced to the British public on 10th August.

In the London Gazette of 14th September 1917, Noel Chavasse was awarded a bar to his VC. His citation read:

“Though severely wounded early in the action whilst carrying a wounded soldier to the dressing station, he refused to leave his post, and for two days, not only continued to perform his duties, but in addition, went out repeatedly under heavy fire to search for and attend to the wounded who were lying out. During these searches, although practically without food during this period, worn with fatigue and faint with his wound, he assisted to carry a number of badly wounded men over heavy and difficult ground. By his extraordinary energy and inspiring example he was instrumental in rescuing many wounded who would have otherwise undoubtedly succumbed under the bad weather conditions. This devoted and gallant officer subsequently died of his wounds”. 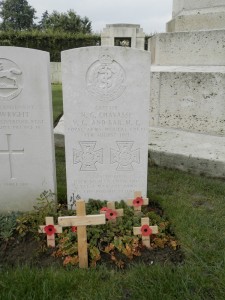 He is buried at Brandhoek New Military Cemetery (there are three others) in Plot 3 Grave B15. It is near the Cross of Remembrance and distinguished by having two VCs engraved on it as well as often having a collection of crosses and poppies at its foot. 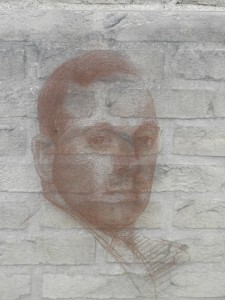 I find the attitude of his father, the Anglican Bishop of Liverpool, as impressively striking as it is utterly remote from the histrionics that nowadays attends the death of someone famous. He wrote to his other son, Christopher, Noel’s twin,

“You will have heard by this time that our dearest Noel has been called away…. Our hearts are almost broken, for oh! how we loved him. Your dearest mother is pathetic in her grief, so brave and calm notwithstanding. But again and again, we keep praising and thanking God for having given us such a son. We know he is with Christ, and that one day – perhaps soon -we shall see him again. What should we do in such sorrow as this, if we could not rest on the character of God, on his love, and wisdom and righteousness….”

As an afternote, in 2009, Lord Ashcroft bought Noel’s medals from St Peter’s College, Oxford for a record sum of about £1.5m, easily topping the previous record sale amount of £1.0m to a private buyer. As a result, they can now be seen in the new Lord Ashcroft Gallery at the Imperial War Museum which houses his collection, the most comprehensive in the world, as well as the VCs and George Crosses held by the museum.

You can find out about it here: http://archive.iwm.org.uk/upload/package/184/index.html

I am grateful to Ian Jones whose blog http://www.chavasse.u-net.com/chavasse.html  contains much information and to Ann Clayton’s book ‘Chavasse – Double VC’ which contains much more.