I am fascinated by very old buildings because of the span of human experience they represent. They were created in very different ages by people with very different perspectives. An historian attempts to understand the motivation and context in which major projects were planned as well as the use to which they were then put. The cathedral in Chartres undeniably is old; it was substantially completed by 1250. It is not the oldest cathedral I have studied. That honour falls to the imperial church of Hagia Sophia in Constantinople, which is 700 years older. That was built initially by the Emperor Constantine, fell down twice in earthquakes because of the enormous span of its dome, the engineering for which was then perfected and it was completed under the Emperor Justinian in about 560AD. It was then the main church of Christendom for a period of almost 900 years until the conquest of Constantinople by the Ottoman Turks in 1453; longer than the current cathedral at Chartres has stood. 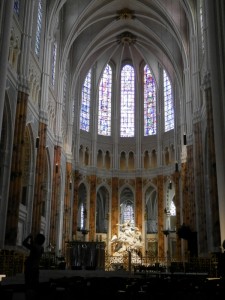 However, for Chartres to have survived war and revolution in Europe for three quarters of a millennium is an impressive achievement. It was not plain sailing. During the French Revolution in 1789, a mob started attacking the cathedral. The townsfolk defended it but the Revolutionary Council ordered that it should be razed using explosives. Only the enterprise of the architect delegated to do the task, who pointed out that it would take years to clear the rubble, saved it.

During World War 2, the city suffered heavy bombing, but the church was not hit. Later, the Allies decided to destroy the building as they feared it was being used by the Germans as an observation post. An American officer, Col Welborn Barton Griffith Jr., volunteered to go behind enemy lines with a single enlisted man to establish whether it was being so used. He confirmed that it was not being used by the Germans and the order was rescinded. Sadly, the valiant Colonel was killed near Chartres in August 1944.

As with all buildings built using wood for the roof and illuminated by candles, fire was a major menace. In 1836, fire destroyed the old lead covered roof. The timbers were replaced with a revolutionary cast iron structure, at the time the widest span in Europe, and the roof was replaced with a copper covering. In recent years, there has been an almost continuous programme of cleaning and restoration. 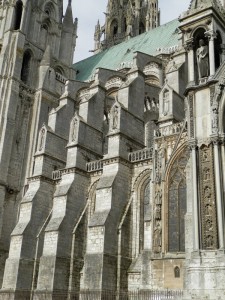 The cathedral is built on a prominent hill. Walking up to it, from where I parked by the river, involved over 250 steps in a succession of flights. As one approaches, the overwhelming impression is of a forest of flying buttresses. These clever devices were designed to transmit the lateral forces caused by the weight of the roof, or wind pressure on it, to the ground without requiring enormously thick outer walls. At Chartres, the buttresses are heavier than they became in later Gothic churches, such as Amiens or Beauvais, where the diagonal flyers became thin and elegant. 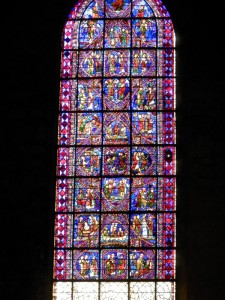 One advantage of thinner outer walls was that they could have larger windows and these offered the opportunity for glorious stained glass. Chartres has magnificent stained glass windows (example right), most of which date from the period 1205 to 1240. The West window, featuring the Last Judgement is a beautiful example (seen below from inside and out). There is a famous window, perhaps Chartres’ most famous, variously called ‘The Blue Virgin’ or ‘Belle Verniere’, is found in the first bay of the choir after the south transept. It shows the Virgin Mary, robed in blue, sitting on a throne with the Christ Child. The top part of the window was made in about 1170, with the lower part added in about 1225. (no picture) 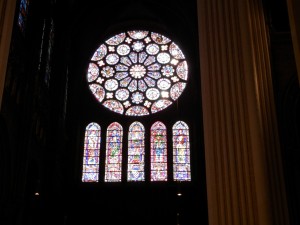 The theme of the Virgin Mary runs right through the cathedral. For ages it has been an important pilgrimage site. Before the present cathedral was built, pilgrims came to the site of a well, now located in Fulbert’s crypt, into which it was believed had been thrown the bodies of various saints. It came to be known as ‘Puits des Saints-forts’ or ‘Well of the Strong Saints’. 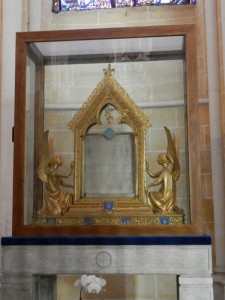 In the Middle-Ages, the cathedral received the ‘Sancta Camisa’ believed to the shift that Christ’s mother, Mary, wore when he was born. Legend quickly grew up that this had been given to the Emperor Charlemagne by the Byzantine Emperor Constantine VI when the former was on crusade. However, as Constantine VI died in 797 and the First Crusade did not arrive until 300 years later, this is clearly imagination. It is much more likely that it was given to the church by Charles the Bald either when he was King of West Francia (843-77) or as Charles II, Holy Roman Emperor (875-77). There is no known evidence of it being venerated as an object of pilgrimage before the 12th Century. 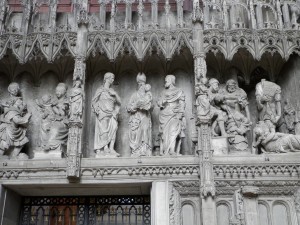 The monumental screen around the choir was started in the 1500s and completed in the beginning of the 1800s. It is an impressive screen with biblical scenes carved into fresco. 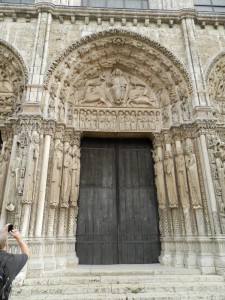 Last, the main entrances in the north, south and west are remarkable for their carving. The West Portal is a survivor from the 12th Century church and was incorporated into the present building after the 1194 fire. The carving represents the ‘summa’ or encyclopaedia of theological knowledge. The three portals focus on different aspects of Christ’s role; earthly incarnation, his return (parousia), and his eternal role. The harmony of the three entrances owes something to its aspect, 10:7 which was the medieval approximation of the square root of 2. 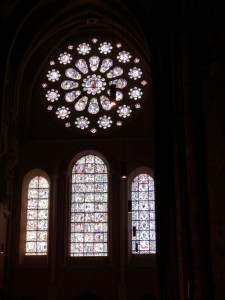 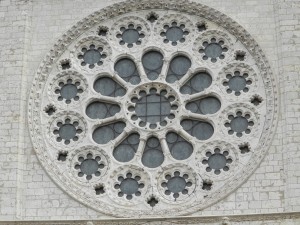 Above, the West Rose window from outside and in.

Having absorbed all that I could of the grandeur of Chartres, I was happy to descend the 250 steps back to the comfort of my motorhome, and a nice cup of tea. If you are able to visit Chartres, I hope that this may serve as a taster and encourage you to discover more of what is has to offer.