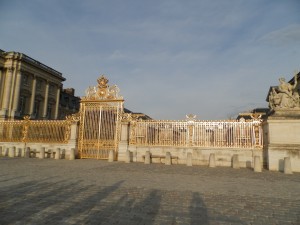 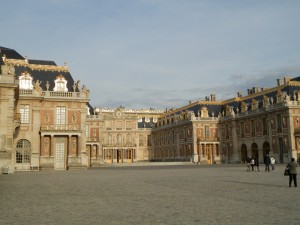 I have wanted to visit the Palace of Versailles for a long time. I became particularly aware of the place in the context of the 1919 Treaty of Versailles in which the ‘Great Powers’ agreed how they would punish Germany for her part in the First World War and divide up her sphere of influence and colonies. My particular interest was the battle that Col TE Lawrence, otherwise known as Lawrence of Arabia, had to stop Britain and France ignoring the demands of his Arab leaders, without whom he could not have marshalled the armies to capture Aquaba or Damascus, and carving up the Middle East to suit themselves. Needless to say, Lawrence was now dispensed with; his services no longer needed, and so his voice could be politely ignored. Britain and France agreed how Syria, Jordan, Lebanon Palestine would be mandated between them. So were the seeds of the current Middle East sown. However, all this happened in the famous Hall of Mirrors at Versailles and so I wanted to be there myself. Today, I was. 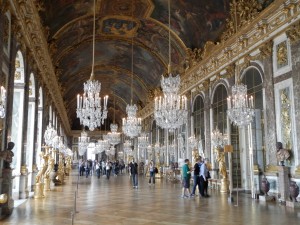 Let me introduce you to the Palace of Versailles. It was the vision of Louis XIV, known as the ‘Sun King’, to create a palace of suitable magnificence that all of Europe should know how splendid were the Bourbons, and France by extension. He had inherited a shooting lodge at Versailles from his father, Louis XIII. As a young man, Louis XIV felt uncomfortable with the oppressive life in Paris, and spent more time at Versailles. His first building programme started in 1664 when he enlarged the palace to accommodate 600 guests invited to a festival that took place over a week in May.

In 1667, France, under 24 year old Louis XIV, went to war with Spain over possession of some areas of the Spanish Netherlands, which he considered the rightful possession of his wife, the daughter of the king of Spain. In 1668 peace was forced on the warring parties by an alliance of England, the Dutch Republic and Sweden. Freed from the constraints of war, Louis set about a major building programme. The construction of the ‘grand appartements’ created two matching suites of state rooms, one for the King and one for the Queen. Each suite has seven rooms starting with the most public and becoming more private as one goes through. The inner rooms were still pretty public, by our standards, but one could only go to them by invitation. This lay-out was unique in Europe.

Unhappy with the unsuccessful outcome of his foray into the Spanish Netherlands, in 1672, Louis embarked on a war with the Dutch Republic in an attempt to win more land in the north-east. It dragged on for six years, at the end of which France’s expansion had achieved dominant power status in Europe. This was a threat to the other powers and in time would result in the Nine Years War, which he would lose. However, for now, Louis could get back to his building programme and in 1678 improved the north and south wings and had the Hall of Mirrors built. By this stage, the palace was substantially as it looks today. 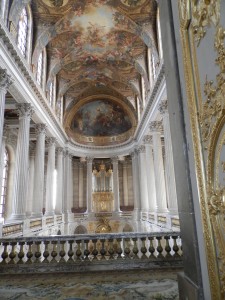 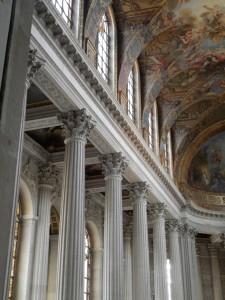 At the end of the Nine Years War, in 1697, Louis carried out his last major building work with the construction of the chapel which was completed in 1710. This took over a decade as, for most of this time, France was at war again. Between 1701 and 1714, Louis was at war with Spain over the issue of his grandson’s right to inherit the Spanish throne. The war was disastrous for both France and the reputation of Louis XIV. France’s finances were left in a parlous state; her population changed from viewing Louis as a hero to someone more interested in his own family politics which he was prepared to pursue at the expense of the French people and economy. Louis died in September 1715 at the age of nearly 77 and was succeeded by his 5 year old grandson, Louis XV.

Louis XV reigned for 64 years during which time he lost almost all of France’s overseas possessions in India and North America to the English, and earned the scorn and contempt of his people for being extravagant, stubborn and incompetent as a statesman. But although he lived and died in Versailles, the changes he made were improvements rather than redesigns. However, he did build the Opera and the ‘Petit Trianon’ as well as the apartments for his daughters on the ground floor. 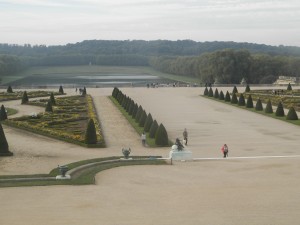 It would be impossible to talk about the palace without mentioning the gardens, which are huge covering 800 hectares (1976 acres!). They are mostly in a style called ‘French Garden’ which is formal and makes much play of water and fountains. The 50 fountains date mostly to the reign of Louis XIV and, remarkably, are still using much of the original hydraulics. There is a major water feature, set centrally to the palace, and called the Grand Canal, with a perimeter of over 3 miles. 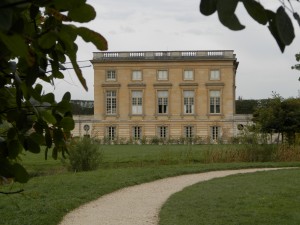 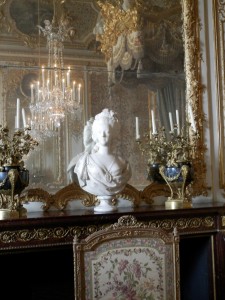 Marie-Antoinette preferred to live in the ‘Petit Trianon’ and there she had the gardens re-styled in the English fashion.

Visiting Versailles is a major undertaking. The State Rooms are very busy with crowds of visitors particularly in the middle of the day. The crowds make appreciating the State Rooms more difficult and it is well worth being there when the palace opens at 9.00am or later in the afternoon. Despite their immense size, the gardens can also become crowded, particularly near the palace. So if you wish to visit the ‘Trianons’ and the gardens, it is worth doing so after visiting the State Rooms in the middle of the day. It is quite a walk around the park, so it is worth being clear about what you wish to see and allowing sufficient time and energy to get around. I spent just under six hours viewing the palace and the ‘Trianons’. I did not get to see the formal gardens in any detail and I did not see any of the groves. But what I saw fascinated me and I am delighted that I made the visit.