Almost a year after Anson Silvester died near Cuinchy, an officer from 1/7th Battalion Worcestershire Regiment was killed near Ploegsteert. 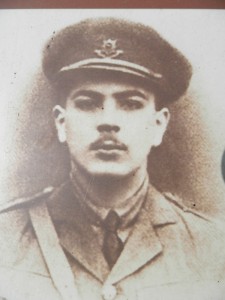 He is buried at Louvencourt Military Cemetery. His name was Lieutenant Roland Leighton. He was a poet as well as a soldier. He wrote a poem that is recorded on an interpretive plaque beside the cemetery. It is a remarkable poem; remarkable for two reasons. First, he understood that the step from playground to battlefield is progression that a man can make. He saw it as a step possible when the circumstances allowed and one that he was proud to have taken. Second, though very much involved in the carnage that was 1915, he considered the call of duty a noble one and the work suitable business for a man.

These sentiments, though much more widespread in their generation, are almost incomprehensible to subsequent generations brought up on a diet of anti-war, anti-establishment, self-preservation principles. Maybe, for that reason alone, I reproduce it here. It is good to be reminded that most people in the first two decades of the last century, the people that fought the war, did not think as we do. To them, service, loyalty, and self-sacrifice were noble ideals that, applied to the business of war, produced remarkable men and great achievements.

In their honour, I reproduce Leighton’s 1915 poem. 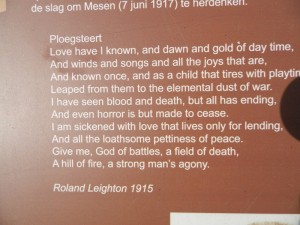 Love have I known, and dawn and gold of day time,

And wind and songs and all the joys that are,

And known once, and as a child that tires with playtime,

Leaped from them to the elemental dust of war.

I have seen blood and death, but all has ending,

And even horror is but made to cease.

I am sickened with love that lives only for lending,

And all the loathsome pettiness of peace.

Give me, God of battles, a field of death,

A hill of fire, a strong man’s agony.