Sanctuary Wood got its name in October 1914. Men separated from their battalions and regiments in the fighting further east around Gheluveld and Polygon Wood used to gather in the relative safety of the wood. There they were put under the command of 2 Brigade and were not to be used except with the Brigade Commander’s authority. During the German offensives in 1915 the wood lost its original meaning with the Germans holding the east side and the British and French the west. It also ceased to be a wood, as the trees were destroyed by artillery fire. 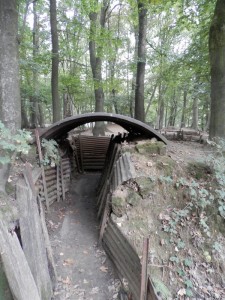 In 1923, the wood was purchased by the family Schier, who decided to preserve the trench systems as they were and create a museum on the site. 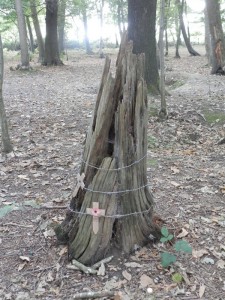 The family still runs both and over the years have amassed an impressive collection of equipment, uniforms and, perhaps most interestingly, about 15 wooden stereoscopic photo boxes. These contain original photos that can be seen in remarkably good 3D. Although not all are of the same quality, the best are really very good. These are very unusual today as they are uncensored. War is seen in all its gruesome horror and, as a result, paint a vivid background to the trenches outside. Modern museums are much more anodyne, though technically advanced.

There are some original German gravestones, replaced when graves were moved to their final concentrations in German cemeteries. Piles of shells from the annual ‘iron harvest’ reveal how the land continues to give up the metal with which it was so thoroughly infested. The area around the trenches is still pitted with shell holes that, even after the normal process of silting that goes on over the years, are clear and distinct. It has been hot and dry for over a month, but the floor of the trenches was still too wet and muddy to walk without wellies. That helps to imagine how it must have been when in use and churned up by many feet.

The Sanctuary Wood trenches are now the best preserved original trench lines on the Western Front. They used to be part of the system of front and support line trenches from 1916.

For those who want the most authentic insight into life on the Western Front during the First World War, a visit is indispensable.