Langemark is the largest German Military Cemetery on the Western Front. In it rest just over 44,000 German soldiers, most of them relocated from battlefield burials after the war. 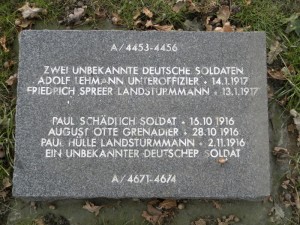 It is a sombre place; dark and shaded and quite lacking the English country garden feel of the British and Commonwealth graves. The graves are marked by simple plaques horizontal on the ground on with up to six or seven names of known or unknown soldiers. 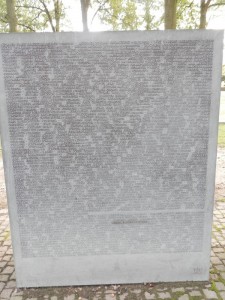 In the centre is a large mass grave in which nearly 25,000 unknown soldiers are buried. The names of the lost are recorded on gray granite pillars around the mass grave. 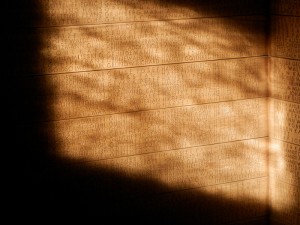 The graveyard is entered through a heavy, red, granite entrance. On either side of the entrance is a room, the walls of which are covered from ceiling to floor with names. The names are inscribed into wood panels which add to the dimness of the room. On my visit, a beam of sunlight was filtering in through the high level grill and focussing in one corner. It was a photographer’s gift, though I am probably not that person. I decided to take a picture across the room to capture the effect and did so. 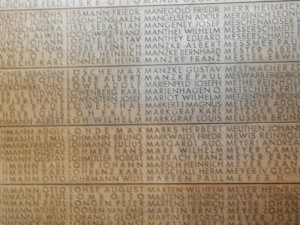 I also took some photos of the unlit names for comparison. Having finished, I went outside to look at the cemetery. 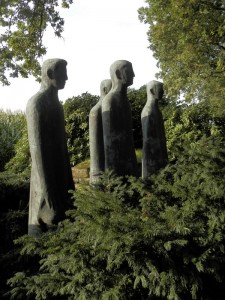 There is, opposite the entrance, a striking group of four, slightly larger than life, men in bronze standing on the edge of the cemetery. They represent comrades looking on. It is a most imposing piece of statuary; very sombre and evocative. 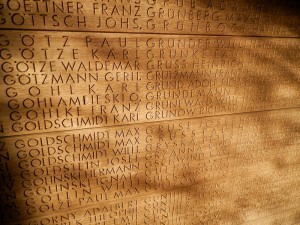 When I finished that part of the tour, back at the van, I downloaded the pictures of the day to my computer and had a look though them. I was very surprised indeed to find that the beam of sunlight had illuminated the names of four soldiers, all of whom were called Goldschmidt; the German rendering of my name.

I leave it to those of you given to such speculation to consider the significance of that and the probability of circumstances coming together to allow it. For me, it remains in the mystery box.