The first two weeks of November of 1914 were for us challenging and messy. We were in reserve mostly and so were sent here and there to relieve the other battalions of the brigade, to patch up holes in our line where the Germans were pushing hard or to counter attack to regain ground we had lost. On 3rd November, there was a lull and the battalion tried to get some rest. The men had not had their water bottles filled for 48 hours and so were very thirsty. The worst part of those days was the constant shelling. Although it caused little real damage and few casualties, it was very disturbing preventing us from sleeping. On the 6th, we were sent to reinforce 4th Guards Brigade on our right (west) because the enemy was pushing up from Zandvoorde. The next day, although we heard furious rifle fire from the French on our right, who were attacking, we were not engaged and after 48 hours we were relieved by the London Scottish and moved back to Coalbox Wood on the Menin Road. There we immediately started to be shelled and were soon ordered to counter attack a line of trenches that had been lost. No sooner than we had begun, than we were ordered ¼ mile back to attack the same objective but from a different direction. While we were lined up on the road in fours, we were shelled again, luckily without many casualties and then the attack was abandoned so we returned to our trenches in Coalbox Wood. The shelling began again at about 10.00am the next morning and we spent the day in patching up the line. Things were pretty critical, as the line had been broken in a number of places. This went on for three days before we learnt that 1 Division was being withdrawn from the line. The next day, the 16th we moved off at about 2.30am and marched round to the south of Ypres following the railway line eventually reaching the village of Strazelle on the 18th.

The following day we marched to Hazebrouck in a driving blizzard arriving, cold and wet, at 3.00pm. When we paraded there, we were told that a number of the officers had been granted 96 hours leave; ALS among them. The battalion remained in Hazebrouck for the next month. Most of the time was spent training the new drafts and in route marches to keep the men fit. One of the major problems with spending time in trenches was that the mens’ feet deteriorated and they lost marching fitness which made deploying anywhere more difficult.

It was during this month that HM The King visited and on 3rd December the battalion lined the streets for the visit. We were also visited by Gen Sir John French who expressed his gratitude for the work we had done around Ypres.

Anson spent two days with his parents in Clacton on Sea where his father was Rector of a small rural village church in Great Clacton. 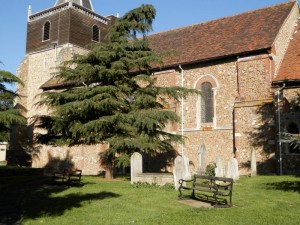 On 21st December 1914, the battalion was ordered to move off at 7.00am We were not unhappy to find that we would be transported by motor-bus for at least part of the way. However, we were less pleased at how long it took to get going; wheels did not start turning until 10.00am. Three hours waiting, sitting on wooden seats, is a trial for anyone. We had been told to bring all our digging and wiring tools as well as 40 boxes of ammunition, so you can imagine how loaded the buses were. We drove to Le Touret and then debussed as we had been ordered to attack the German positions on La Quinque Rue, near Festubert.

The Northants and The Loyals were to mount the attack at dusk and we and the Seaforths were to provide flank protection and reserve. The following day, we were to relieve the Seaforths but due to the appalling state of the communication trenches, it took nearly all day. While we were doing this, the enemy had gathered in large numbers behind the houses and in the orchards and had succeeded in bombing the Loyals from their left hand trenches. Later in the day, the Germans managed to get into our fire and support trenches and we spent a busy few hours building barricades and bombing each other at close quarters. The fire trench on our right was a miserable affair; the men having to stand to their waists in cold water as there was no other cover. Thankfully, on 23rd December we were relieved by the Grenadier Guards. Over the three days of attacks we had lost Lt Verral, plus two subalterns wounded and 28 men killed, wounded or missing.

On Christmas Eve, the battalion marched to Le Hamel arriving at 8.30 in the morning where we billeted. On Christmas Day we were ordered to march to Cambrin to relieve 6 Brigade but at 11.30am the order was cancelled and we remained in billets all day. C Company, who had been on our right in the water-logged trenches, had 90 men admitted to hospital with rheumatism, ague and trench foot. On Boxing Day, we were off again and took over 900 yards of trench between Givenchy and the La Bassee canal.(shown below with Pont Fixe in the background) 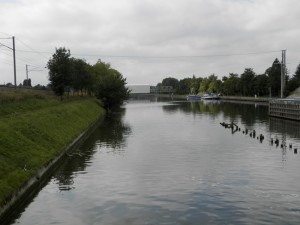 We had to hold this with 3 companies as the remainder of C Company had been divided up between the others. We had one platoon in reserve and spent the next couple of days improving our trenches which were very wet. The enemy sent over some HE shrapnel rounds onto the road near the battalion HQ, but there was little damage. We lost one man to a sniper and on 29th December the battalion’s  complement of machine guns was increased from 2 to 4. On 30th December, B Company was relieved in its trenches by 100 men from the Loyals and became the brigade reserve.

The 60th Rifles were south of the canal. They were about 300 yards forward of our right. During the night their observation and machine gun post on the canal bank had been bombed out. The Brigade reserve was tasked to counter attack at 10.30pm. B Squadron moved forward crossing the canal at Pont Fixe and advancing along the south bank. They had crept to within about 30 yards of the post when a barrage of rifle and machine gun fire opened. Among the first to be fatally hit was 2Lt Anson Silvester. He realised that the attack was hopeless and ordered his platoon sergeant to get the men back to cover. He died that night but his body was not recovered until 12th January 1915, when it was buried in Cuinchy Communal Cemetery among the civilian graves. Four other men were killed that night and 17 were wounded or missing. 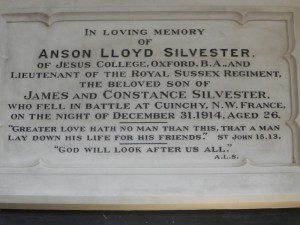 So ended 1914; so ended 2Lt Anson Lloyd Silvester. His parents raised a monument to him in their church and wrote a short valedictory biography, ‘A Royal Sussex Hero’.