Exactly two and a quarter years ago, I found myself in one of those, ‘Oh! So what do I shall I do now? moments’. It was one of those moments when current assumptions are suddenly invalid and the horizon, when one looks up to see it, is almost without limit. One is free to go in almost any direction; it could genuinely be called a watershed. As those of you familiar with this web-site will know, I decided to build a motorhome and then take to the roads in Europe. Because I was still working, the build took until April this year to be useable, though definitely not finished. From May, I based myself in it and moved to Macclesfield to be nearer family. Other events then overtook me, but I continued to plan to visit Belgium and France in September.

Yesterday, I drove my motorhome to the Channel Tunnel terminus. I was delighted to drive up to an unmanned cubicle and after a second or two, see ‘Welcome, Mr Goldsmith’ on the screen. Great use of technology like ANPR and on-line booking means that there is no delay, my screen ticket is printed and I am through into duty free.

It was really quite an exciting moment as I boarded the train, driving slowly along the carriages. It is not that I have never used the tunnel before; I have used it many times with both cars and motorbikes. It was that I was going to Europe in my motorhome. At this point, I can imagine those thinking, ‘what a sad individual he must be’. Perhaps. But having built it myself, it is special. When the water flows, or the lights work, or I snuggle up in my comfortable bed, or I cook myself a meal, I think to myself, ‘I have made this!’ It gives me a real thrill.

I built the motorhome to be an independent unit. I wanted to be able to last for days, even weeks, without having to use campsites. So I carry gas enough for about a month and the leisure batteries are charged as I drive, as do phone and computer. Delightfully, I experienced my first night wild camping last night and tonight will be another. 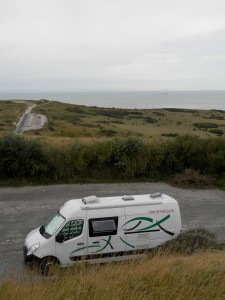 Last night, I headed out from Calais onto the coastal road avoiding, like the plague, anything that looked remotely like a motorway. Before long I found a spot overlooking Cap Blanc Nez on which stands a tall obelisk and a viewing platform. I am fairly certain that it commemorates the Dieppe landings, or something similar. It is surrounded by German concrete bunkers. It was too late for me to investigate and the approach road was limited to 2.1m height, which would have removed the top 0.5m of my van. So I gave it a miss and settled down as the sun was setting with the cliffs of Dover clearly visible over the water. Between you and me, it is the sight of England that I like best; viewed from abroad it is more appealing. 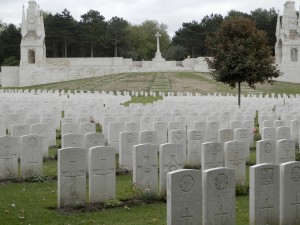 Today, I visited Etaples Military Cemetery. It is the largest military cemetery in Europe because it was close to where the base hospitals and training camps were located during the first world war. Unrecognisable numbers died of their wounds due to the immense difficulties of getting back from the trenches at the front line. Forward dressing stations were able to do very little except stop bleeding and administer morphine. Convoys to the rear were slow and disrupted by enemy shell fire and distances were great. 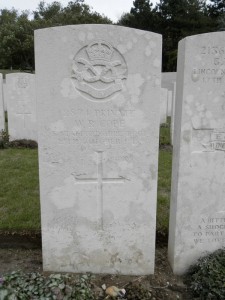 My great-uncle, Ray Cope, was such a casualty. He was wounded in the assault on the Hohenzollern Redoubt, a German strongpoint, in May 1915 and died either on the way to, or at the base hospital, from wounds. The cemetery is elegant and beautiful. It was designed by Sir Edward Lutyens and is the final resting place of over 11,500 British and Commonwealth soldiers as well as a few Germans. It took me while to decipher the way the graves were arranged and numbered, but eventually after walking around I found the group and plot I was looking for. Then, there before me was the grave of Private Ray Cope. It is a damned fine resting place.

As I was making way to my resting place for tonight, I tripped over a McDonalds. I was delighted as that allowed me to use their wifi to upload some photos to Facebook and answer emails. The sign on the door said, ‘WiFi gratuite et illimite’ (with an acute accent on the e!) What a fine public service to us travellers. Shortly, I shall pour a gin & tonic and search for an open wifi link. Then I shall sit back to enjoy the evening with a pipe of good tobacco and a glass of fine armagnac. Happy days; content soul.