“Would you like to go to Buckingham Palace to see the Jubilee Exhibition?”

I have never been to the Palace, having been awarded medals neither for gallantry nor meritorious service so the question was somewhat redundant. However, the person asking it could not have been expected to be familiar with my curriculum vitae, and so their question was forgivable. The answer was not long coming, and so it was that we joined a happy little group of twenty heading to the Horse & Hounds on Broadway High Street at an unfashionable 7.30 in the morning. Fortunately for us, the walk was a gentle six minutes although I was less than thrilled to discover that we were the first there; too enthusiastic. Surely a little later, perhaps as the coach pulled up, would have suggested a world-weariness born of having to go to the Palace, yet again. But no, my enthusiasm was evident to all as they joined us. Fortunately, the coach arrived shortly after and we were able to climb on and find seats. Perhaps unwisely, we chose the row in front of the rear seats, which were already taken, and claimed for ourselves the dubious pleasure of sitting over the wheel-arch.

The journey was slowed by the inevitable road closures but our driver was undaunted and confident that he would have us delivered for the ticket time of 11.00am. He was good. We arrived with two minutes to spare and only 50 metres to cover. Were it not for the crowd milling around the entrance unaware that they could not get in before the time on their tickets, the challenge would have piffling. They made it more exciting but some un-British pushing and shoving had us at the front and through the first check without too much difficulty. There follows an airport style security check overseen by the imperious ennui of one of the Met’s finest. Divested of my watch, purse, phone and belt, my concern was not the discovery of some hidden contraband, but the loss of my trousers as I ambled nonchalantly through the detector. Fortune smiled, and we were through to collect our audio guide and begin the tour.

I have always enjoyed visiting palaces and old churches. My fascination with things Byzantine has led me to spend time in Constantinople (modern Istanbul) studying the extensive remnants of the imperial city. I have stood amazed at splendour of the Emperor’s church, built from 325AD, St Sophia. Never before, though, have I visited a Royal Palace that is still a working palace and seat of the Court. There are few buildings whose façade is better known than Buckingham Palace and everything in my background and upbringing lends a sense of awe to being able to visit the Queen’s working headquarters. The State Rooms are as splendid as they should be. They are in almost daily use as our sovereign carries out her formal and state duties receiving ambassadors, state visitors and dignitaries.

I was particularly struck by a number of things. First, used to buildings that have been in families for centuries, it is striking that Buckingham Palace has only existed for just over 300 years and it has been the monarch’s main residence since the young George III took possession of it in 1762. He was followed by his brother, George IV in 1820, William IV in 1830 and then Queen Victoria in 1837. It was Queen Victoria and her consort Prince Albert who really established the palace as the main royal dwelling.

Second, one could not help but be impressed by the art and sculpture on display. The Picture Gallery contains only a fraction of the royal collection but that fraction is mighty. A magnificent portrait of Charles I on horseback by van Dyck, commissioned by the king himself, dominates the entrance. Rembrandts, Canalettos, Reubens, Caravaggios line the walls of a gallery intended as one of the principal reception rooms of the palace. Only a few of the pictures have an audio introduction, so rich is the collection. Intended to impress, it certainly succeeded with this tourist. 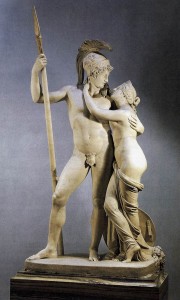 There is also much fine sculpture. Outstanding among the pieces we saw was Canova’s Mars and Venus. Though sculpted well after the Renaissance from which it draws inspiration, it is a stunning piece. It stands in an alcove at the foot of the stair down which one descends from the stunningly beautiful White Drawing Room.

Some of the items of furniture that one is able to see are absolutely incredible. 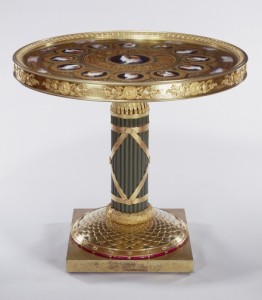 Two, in particular, stand out. First was the circular table, known as the Table of the Grand Commanders. It was commissioned by Napoleon from the Sevres factory in 1806 and took 6 years to make. He had it for three years before his defeat. Two years later, the restored but impoverished French king, Louis XVIII, gave it as a gift to George IV. The surface of the table is made from a single piece of Sevres porcelain which had to be fired after each head was painted. The margin for error was enormous and perhaps explains why it took six years to make. 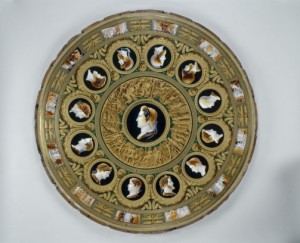 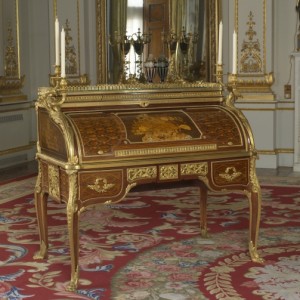 Another item of furniture that stands out is the quite exquisite roll-top desk that stands in the White Drawing Room. Made in about 1775, perhaps for one of the daughters of the French king, Louis XV, it has marquetry of the most superb standard into which is inlaid trophies and flowers.  It was bought by George IV in 1825 and is thought to be the finest example of its kind in existence.

The specific exhibition was the Queens diamond jubilee. There were terrific exhibits from 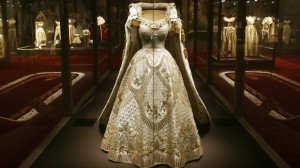 the Coronation. Again, two stand out as extraordinary. The first is the Queen’s coronation dress and train. I have never seen such an exquisite dress, beautifully embroidered and with the emblems of her British nations, Dominions and countries of the Empire. She was probably well corseted as the waist was tiny. The dress must have been heavy, but nothing, I suspect, compared to the train, which was at least 6m long, made from royal blue velvet.

The other exhibit that really impressed us was the table display in the State Dining Room. Three tables were laid as for the dinner after the Coronation. Each place setting had Sevres plates flanked by gold cutlery. At the head of each were seven wine glasses. In the centre of the tables silver gilt candelabra stood stately beside gold vases full of pink and white carnations. It really was a regal sight.

We left the exhibition and the Palace delighted to have been. Although not the first time for Moira, it is a place that thrills each time one visits. For me it was a new delight. Perhaps the only thing to do after such a visit is to reflect over a good lunch and a glass of wine. We were fortunate to meet up with Michelle who had arranged for us to enjoy lunch at Reubens Hotel, near the Palace. We met in the Cavalry Bar, which could not have been more appropriate. There was a nice montage of the 17th Lancers at Ulundi in 1879 in one corner. Lunch was excellent and perfectly filled the time until the coach collected us for the return journey. It was a wonderful day.