My daughter was horrified at the prospect of my using the car parks of a well-known supermarket to park in during the day. When I am working nights, I sleep in the car park of the hotel I am working in. After waking, I move to the superstore that is near, where I have lunch and shop for the next supper. It is a simple existence but it has real benefits. It costs nothing to park in either car park. At first I was concerned as at about 7.00pm a Police Transit comes and parks in the supermarket car park.  Initially, he parked at the far end facing the car park, presumably so he could see what was happening. As we became accustomed to each other’s presence I found that he started parking so that he was facing away from me. On occasions, when I have been in a different spot, he has parked only half-way along the car park, which seemed to me to be very tactful. I have no idea why he is there or what he may be watching, but I like to imagine that we are co-existing. He leaves at about 10.00pm.

Parking in the supermarket car park has another huge benefit. It gives me internet access. There is a decent 3G signal so I can use my iPhone as a personal hotspot, which gives me internet access on my lap-top. It also allows me to use Viber, to make free phone calls. While I am connected like that, my lap-top also charges the phone. I have another method of connecting. 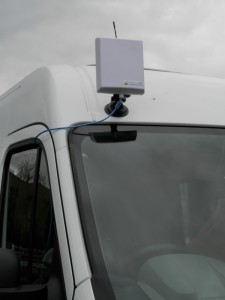 I bought an external antenna from the lovely Adam and Sophie of Motorhome Wi-Fi. Using this, which sticks easily to the outside of the van, I can link directly to the Tesco Wi-Fi. I bought this system for when there is no 3G signal and it can be used to search for an open connection. The ranges at which one can connect to a Wi-Fi hotspot can be considerable. I have tapped into a McDonalds at about 300m. Adam and Sophie, touring Europe, achieved 18km across water!

I only work a few nights a week. Recently, my younger daughter, Amanda, has had her first child, the adorable Sienna Rose. It has been lovely to be able to pop in for brief visits and watch them getting established. Last Sunday all but one of the family were able to get together for Father’s Day. For all that that event is a recently manufactured occasion, it does provide an opportunity for families to gather, and we had a lot of fun at lunch and at afterwards at Bruntwood Park in Cheadle.

I am beginning to establish a network of suitable campsites. I have found an ideal spot near Broadway, in the Cotswolds. It is a farm called Longacres and is on the A44 on the Evesham side of Wickhamford. It is a flat site with pleasant bathrooms as opposed to showers. Each has its own basin, loo and shower, which makes the daily ablutions less public. They also do B&B. Yesterday I went to an old friend’s housewarming party near Market Drayton. It was a very enjoyable afternoon and I then found a nice campsite near Winsford, in Cheshire. Known as the Elm Cottage Touring Park, it is a well presented site. The pitches are well made and level but, the field being small, are quite tightly packed. The site also has Wi-Fi although it proved to be both expensive (£5.00) and intermittent. The wind and rain, however, made it feel like winter. I am now back on my supermarket car park with my Police van as company and, being Sunday, very few others.