Here’s a ‘Boy’s Own’ story from the first World War that reveals something of how some viewed their combat. It will, no doubt, horrify those who think of soldiers as victims and may yet cheer a few who long for a more robust, less timorous, approach to life. Quoting from Rose Coombs’, ‘Before Endeavours Fade’,

“CSM John Skinner of 1st Bn King’s Own Scottish Borderers … won his award for bravery in the Third Battle of Ypres (known as Passchendaele) when he put three blockhouses out of action in one continuous battle in August.” His citation reads,

“For most conspicuous bravery and good leading. Whilst his company was attacking, machine gun fire opened on the left flank, delaying the advance. Although C.S.M. Skinner was wounded in the head, he collected six men, and with great courage and determination worked round the left flank of three blockhouses from which the machine gun fire was coming, and succeeded in bombing and taking the first blockhouse single-handed; then, leading his six men towards the other two blockhouses, he skilfully cleared them, taking sixty prisoners, three machine guns, and two trench mortars. The dash and gallantry displayed by this warrant officer enabled the objective to be reached and consolidated.”

Ms Coombs continues, ” He returned to England for the investiture by King George V (on 26th September 1917) and the customary 14 days leave. At the end of this time, when he reached Folkestone, he was sent to hospital and posted to the Reserve Battalion in Edinburgh. However, a few days later, he was seen with his company back in the Salient. He had refused to go to Edinburgh, and having his return leave warrant in his pocket, after two days in hospital he had risked a court-martial to return to his men. He also had a bet with a pal, CSM Ross. Both had been wounded eight times and the wager was: who would get the ninth first. Skinner won the bet on March 17th 1918 when he was shot between the eyes trying to rescue a wounded man.

“His funeral was remarkable. The South Wales Borderers’ Padre, the Reverend Kenelm Swallow, officiated in the pouring rain when his body was brought to the cemetery in Vlamertinghe on a gun carriage drawn by a magnificent team of horses and then carried to the grave by six brother VCs of the 29th Division”

A further three VCs from 29th Division attended the funeral making it unique in military history. 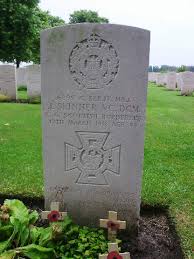