Queen Elizabeth was a very formidable woman. In the 1590s, in England, the next most formidable was probably Elizabeth, Countess of Shrewsbury, otherwise known as Bess of Hardwick. In wealth, second only to the Queen; in importance, a trusted friend of the Queen; in ambition, inordinate and in good fortune, she was almost without equal. But she had not always been so. Born in 1527, her father died when she was only one. He had been a Gentleman farmer, farming 300 acres with a manor on the site of Hardwick Old Hall. She left home, as was the custom, at 12 to enter service for a neighbour at Codnor Castle. There she met, and subsequently married, her cousin, a sickly boy of 13. He died a few months later leaving her a share of his income. She probably continued in service, possibly for the Marchioness of Dorset, mother of the hapless Lady Jane Grey who was Queen for nine days in 1553 before losing her head.

While working for the Marchioness, she married Sir William Cavendish. He was much older than her and had been married twice before.He was also very wealthy having been one of the commissioners for the dissolution of the monasteries, in the course of which he acquired extensive properties. To please his new young wife, he sold his properties in the south of England and bought land around Chatsworth where they started to build a new house on the site of the present house. They had eight children of whom six survived; three sons and three daughters. From her second son, William descended the Dukes of Devonshire, of Chatsworth and Hardwick. From her third son, the Dukes of Newcastle and Dukes of Portland.

In 1557, when she was still only 30 years old, Sir William died leaving her much of his property. Two years later she married Sir William St Loe, a wealthy West-countryman. Sir William was a favourite courtier of Queen Elizabeth and so the marriage was another step up socially. Sadly, he died five years later leaving much of his property to Bess. She was now a very attractive marriage prospect, at 40, and sensationally she married George Talbot, 6th Earl of Shrewsbury. He was a 40 year old widower with six children who was also head of one of the oldest, grandest and richest families in England. Unusually, the match was sealed in a triple wedding. Lord Shrewsbury married Bess, his second son married her daughter Mary and his daughter married her eldest son, Henry. They were married for 23 difficult years. Mary, Queen of Scots, fled to England two years after they were married and Queen Elizabeth gave Lord Shrewsbury custody of her. As can be imagined, she was a challenging house guest. Her retinue of more than 40 people had to be fed and housed. It is reported that she insisted that dinner consist of ten courses! The whole circus had to be moved from house to house, as the Queen directed, to avoid plots. In all they moved 25 times in the 15 years that Lord Shrewsbury was responsible for her. This caused considerable strain. Another strain was caused by Bess’ plans for the house at Chatsworth which Lord S. considered to be his. As a consequence, Bess then concentrated first on remodelling Hardwick Old Hall and then when Lord Shrewsbury died in 1590, on building a new, even grander house near it. Hardwick New Hall was ready to be lived in in 1597 and Bess lived there until she died in February 1608, at the grand old age of 81, an enormous age for the time.

Externally, one is struck by two aspects of the building; its symmetry and the delicacy of the construction. Gone was the requirement to be able to defend the house. This was a major statement of her opulence. 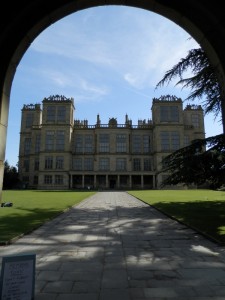 The building has six towers and three floors. Each floor is higher than the one below it and the windows, an expression of wealth, are bigger; two panes high on the first floor, three on the second and four on the grandest third floor. Each tower is surmounted by the initials ES, Elizabeth Shrewsbury. It was said of this building that it was, “more window than wall”. Another remarkable aspect of this house is its contents. ES ordered an inventory of the house in 1601. Many of the items identified in that inventory are still in the house, some in the same room. Because it was not the main house of the Cavendish family, it was left unchanged for centuries. When changes were made, it was to move Elizabethan items into the house from their other houses. The result is a feast of tapestry and furniture from the era of Bess. 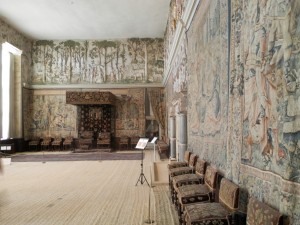 The High Great Chamber is the ceremonial centre of the house and it is built in very grand style. It was where formal state dinners were served, usually at 11.00am or at 5.00pm. Once finished, guests would withdraw to the withdrawing chamber allowing the meal to be cleared before music or dancing began. The other formal room was often the Long Gallery which, in Hardwick Hall, is stunning. 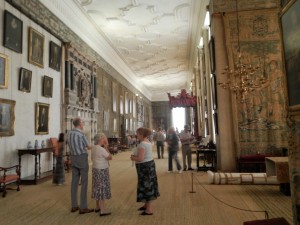 It was also used for dancing, and for exercise in cold and wet weather. It is thought that this ceiling was done after Bess’ time. Such a Gallery would have reinforced the status of the owner as a person of enormous wealth and influence.

Hardwick Hall is run by the National Trust to whom it was given in 1959 in lieu of death duties owed following the death of the10th Duke of Devonshire in 1950. The house and grounds make a lovely day out, especially, when the sun is shinning. You can find it here:

1 thought on “An Elizabethan Masterpiece”